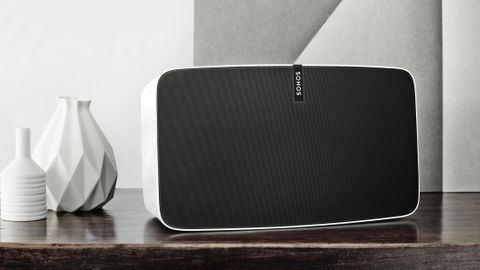 As mentioned before, setting up the speaker takes minimal effort. Load up the Sonos app, click Add New Speaker and press the sync button on the back. If you do this with an iOS device then it will also ask you to reconfigure your setup using Trueplay.

Trueplay is a new software feature that isn't just for the Play:5, it is being rolled out to to all Play:1, Play:3 and Play:5 devices . It has been made to artificially create a better sweet spot for your home. The idea being that unless you are an audio enthusiast, your Sonos speakers won't be in the right position to offer that perfect equilateral triangle sweet spot sound.

A speaker that hasn't been through the Trueplay process will have a red dot beside it in the app. I clicked on this and was made to watch a video that shows just how to use Trueplay. Essentially, you slowly walk around the room waving your device (I was using an iPad) so that the software can sonically map the room your are in.

It's a little strange to walk across a room while the software fires zaps and other strange noises at your Sonos setup, but the whole thing is over in around 45 seconds and the results are definitely audible - although in all three rooms I used it, it said that not much had changed because the speaker positioning was pretty good.

Sonos believes this software will change the way it makes speakers in the future and I am inclined to agree. It's the easiest way I have found to tune to the speaker to the room you are in - and not once did it feel like I was heading into audiophile territory. And, frankly, for a £429 ($499 USD, $749 AUS) speaker that should never be the case.

If you aren't ecstatic with the results then you can always use the EQ controls to get the speaker sounding as you want it. In my tests I didn't have to.

It's bad news for Android users, however, as Trueplay isn't coming to the OS anytime soon. This is because the quality of Android mics vary too much from device to device that Sonos just didn't want to take the chance. The Trueplay process only has to be done once, though (unless you move the speaker) so it may be worth getting and iOS-toting friend in to give your audio setup a Trueplay boost.

The Sonos Play:5 is a stunning-sounding speaker. It's the most powerful speaker Sonos has ever made and this is echoed in its sound reproduction. Testing took the form of a number of genres, to make sure that all aspects of the sound were listened too.

For the lower levels, among other's, The Bug's Lower Dart was listened too. The Dancehall bass reverberated well, without a hint of sludge. Sonos has done well to make this a sealed speaker unit as it really handles bass well. Kendrick Lamar's King Kunta also sounded exceptional especially when turned up loud. And the Sonos Play:5 can definitely do loud - thanks to the three mid-range speakers found in the chassis.

A Tribe Called Quest's Walk on the Wild side was used to test clarity and sounded great. I even noticed the slight slip where the sample loops which I hadn't before, even with headphones on. The break of Kurt Cobain's voice on Nirvana Unplugged's The Pines also sounded beautiful when played back on the Play:5. The Play:5 is very good at picking up these types of nuances.

Tala Impala's Currents was used to test the high- and mid-ranges and again things sounded great. The myriad instruments used in the song never sounded muddled, there's was a decent amount of clarity and offering a wider soundstage than you would normally expect from a speaker of this size.

High-res audio lovers will be disappointed, though. Currently Sonos delivers sound up to 16-bit/44.1kHz. High-res audio isn't supported and it doesn't look like it will be anytime soon. You will have to wait for Apple Music support as well, although this is currently being developed and should ship soon.

Spotify, Google Play Music, Tidal and others are all available through Sonos, but I really hope the software is upgraded soon. There were times when I was lost in the app, not knowing what was queued up audio wise and services such as Spotify just don't look as nice through the app. Given Spotify Connect is gaining in popularity, Sonos will definitely have to counter this with some UI upgrades of its own. Something I am sure it is working on.

The Sonos Play:5 is a stunning speaker for its price range - yes, it's premium but the so is the sound. Its minimalist design will please even the most fussy and the new touch controls are effortless to use. The sound that comes out of this thing is impressively loud and audio does distinctively change when Trueplay is used.

The sound is so good, you may not feel like you need another to pair up for stereo - which is a shame, as this functionality is decent. The small 'feet' that are on both the bottom and the side of the device and unobtrusive but you do know they are there, regardless of which orientation you have the speaker in.

Trueplay really does feel like a game changer but we wonder if people will actually be willing to use it - I did feel a little embarrassed walking around my room wafting my iPad, nothing like the cool, calm person on the demo video.

Limitations of Sonos' app are also starting to show and I would have liked to have seen Apple Music launch with the speakers.

The Sonos Play:5 continues Sonos' slow slew of impressive hardware releases. It's a great-looking speaker with sound that is far more overpowering than the size of the speaker warrants. It does feel, however, that this may be the first release by Sonos that will be overshadowed by a software update. Trueplay has the potential to transform the sound of Sonos speakers, no matter where they are in the room and that is a powerful tool to have.

Even if you don't fancy purchasing the Play:5 but already have a piece of Sonos kit, because of Trueplay your hardware is about to get an impressive upgrade.

The Play:5 is a fantastic upgrade from Sonos, one that was needed given how crowded the wireless streaming marketplace has gotten. It's a speaker that compares admirably to those in its price range - both in looks and in sound.