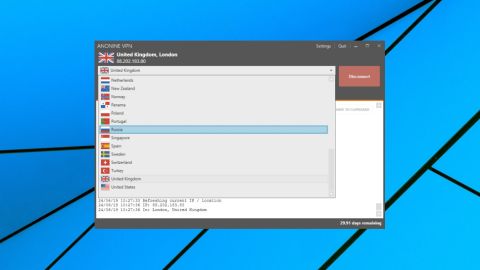 Although it scores in some areas (Wireguard, Bitcoin, unblocking Netflix), poor speeds and assorted other hassles make Anonine difficult to recommend.

While many VPN companies sell themselves on their site unblocking abilities, Swedish-based Anonine has a website that is more focused on privacy, with headlines like 'always anonymous', 'nothing logged' and 'encryption for all your devices.'

The company network is relatively small, with just 150 servers across 35 countries. But once you're connected, the service more than covers the VPN basics: P2P-friendly, 5 simultaneous connections, no limits on bandwidth or speed.

There's OpenVPN, PPTP, SSTP and L2TP (over IPsec) support, STunnel obfuscation to bypass VPN blocking, and Wireguard via third-party clients. Custom Windows, iOS and Android apps are available, while web tutorials show how to configure a Mac, routers and more.

More unusual extras include port forwarding support, and the ability to get a free public IP address for the Swedish location. Your IP won't be protected by Anonine's firewall, but it does mean you're able to expose services on your system to the internet (run a server, say), and Anonine suggests it might 'improve your experience' with P2P and online gaming.

We noticed one odd issue with the Anonine website: Kaspersky raises a phishing alert for its Purchase page. This seems a very obvious false alarm, to us, but if you're using Kaspersky and see this, do what we did: paste the URL into VirusTotal. We found Kaspersky flagged a problem, but it was a very obvious outlier, with all 69 other engines reporting the page as clean.

Anonine's privacy policy is lengthy, but relatively detailed, with multiple sections recording the data it stores, the reason each item is kept, and how long it's retained.

Anonine does store the traffic used for each account, but only as a single figure, a total, not anything that could identify when you used the service.

Detailed session logging seems to be largely ruled out, as the policy says Anonine doesn't record logs, connection timestamps or session durations, the locations or servers you select, IP addresses or DNS requests.

This all looks good to us, but as usual with smaller VPNs, there's no way to know whether Anonine really is following these rules. Providers like TunnelBear, NordVPN and VyprVPN have put their systems through public audits to give more reassurance about what they're doing, and hopefully, over time, the rest of the industry will follow suit.

Signing up with Anonine is easy, with the company supporting payment types including card, PayPal, Bitcoin and other cryptocurrencies, and more.

Clicking the Windows link didn't just download the executable, for instance - it opened a new page with a screenshot and installation and setup advice. Not that we really needed it, as the client downloaded and installed in a few seconds, with the minimum of hassle.

The Windows client has a slightly cluttered interface, with some repeated or unnecessary functions. You can choose your server from a simple menu at the top of the window, for instance, and click a Quick Connect button. But at the bottom of the window, you can scroll precisely the same list of servers, each with their own individual Connect button and a simple Favorites system.

Once you figure out the basics, though, the client is easy enough to use. You're able to choose a server and connect in a couple of clicks, and your protocol options are available on a drop-down list (OpenVPN TCP and UDP, L2TP, PPTP.)

A very basic Settings panel covers some simple options, including the ability to launch with Windows and automatically connect if the VPN drops. But it scores bonus points for offering two kill switch options. The first is a system-wide setting which stops all traffic if the VPN drops. The second stops traffic for selected executables only. (Unlike competing VPNs, the client doesn't forcibly close the executable; it just uses Windows filtering platform rules to prevent them communicating with the outside world.)

Mobile VPN apps usually have less functionality than their desktop cousins, but Anonine's Android offering takes this to new extremes. There's no Favorites system, no choice of protocol, no custom kill switch, no settings at all: it's just a list of locations and a Connect button. Great for operational simplicity, not so interesting if you're looking for features or functionality.

Overall, Anonine's apps aren't up to the standards of the best VPNs, but they don't make any huge mistakes, either. If you're only looking the VPN basics, you'll find just about enough here to get by.

Our tests began by checking how Anonine's Windows client might protect us if the VPN connection dropped.

The news was mostly good, with the client immediately noticing the problem and updating its interface to say the VPN had disconnected. There was no desktop notification, unfortunately, so if Anonine's interface was out of view, you wouldn't realize anything had happened.

Turn on the kill switch, though, and it's a different story. A pop-up alert warned us that we'd been disconnected, the client immediately blocked our internet access, and a 'restore' button allowed us to get connected again once we'd closed any sensitive applications (browsers, torrent clients, or whatever else you might be using.)

The only small issue is that, even if the auto-reconnect feature is turned on, it has no effect if the kill switch kicks in. You must disable the kill switch, then reconnect manually. But that's a small design point, and overall the kill switch worked exactly as it should.

There was a follow-up privacy plus in our leak tests, where multiple sites (IPLeak, Dnsleak and others) couldn't find any DNS leaks from the Windows client.

Anonine's apps try to make it easy to unblock websites, with some locations specifically dedicated to accessing BBC iPlayer and Netflix.

We had some issues with iPlayer, as the site displayed repeated 'this content doesn't seem to be working' messages. As this isn't the BBC's usual geolocation error, though, we're not going to count it as an unblocking failure.

The news was better with US Netflix, where Anonine got us in with both its east and west coast servers.

Our final speed tests got off to a good start, with UK servers averaging a capable 60-65Mbps, but that didn't last for more. We thought US speeds were disappointing, with a peak of around 20Mbps, but that's before we found Singapore struggled to around 7Mbps, and Australia regularly failed to hit even 1Mbps.

Anonine is a difficult VPN to judge, as for every plus point, there's a matching problem (especially its very slow speeds in some locations.) Could still be a smart choice if you need its specific features - a Swedish VPN that supports Wireguard and unblocks US Netflix, say - but everyone else should give Anonine a miss.