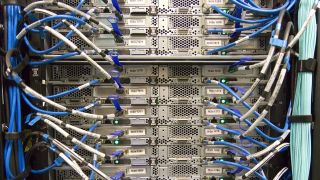 If you’ve watched original must-see box-set The Wire, you might recall Hamsterdam. For those who haven’t seen the series, Hamsterdam was an area of Baltimore which a senior police officer allocated as an unofficial decriminalized area for drug dealing and use.

Bemused beat officers, under instructions only to take action if violent crimes were being committed, were left watching activities that would ordinarily have put them on red alert.

That is a bit what it’s like being a web host getting to grips with DevOps practice for the first time.

You see, external website hosting is - or at least traditionally has been - about creating a neat, controlled environment that is ‘governed’ by agreed standards of IT and security best practice and ‘policed’ by a strong aversion to change, uncertainty or risk in order to keep a population of clients safe and secure.

When an agile DevOps approach was first brought to Tibus by clients wanting to create a development-production continuum, our natural inclination was to fight back and ‘arrest’ this potential threat to our lovely controlled hosting environment.

Dragged kicking and screaming by clients who wouldn’t take no for an answer, we’ve learnt to embrace a sort of DevOps Hamsterdam.

To do this, we have had to pretty much tear up the rulebook and find new ways of working. But the truth is that we wouldn’t go back to the old way of doing things. Here are a few lessons we learned along the way.

As alluded to above, most successful hosting companies have traditionally operated by enforcing tight change control. To be a successful web host in the age of DevOps, that has to change.

The ring-fence around the production environment has to be lifted or at least expanded to include the development environment.

Clients, you will face resistance because this is as alien to a web host as the idea of watching a drug dealer go freely about his business is to a police officer, but it is an absolute must for agile, rapid or frequent deployments.

For that reason, you need to push to find a change control demarcation point that meets your needs. Listen to your host’s advice on good change control, but don’t settle until you have agreed a plan that meets your production and development needs. If you don’t fight for this, your DevOps approach will not function as it should.

Don’t get bogged down in the politics

If you did watch The Wire, you might remember that Hamsterdam worked perfectly in its aims of reducing crime and anti-social behaviour across the city and bringing health services to those most in need, but was ultimately thwarted by political pressure and uninformed moral outrage around the idea of what it represented.

This could have easily happened to us before our DevOps Hamsterdam even got up and running because the idea of some of the changes seemed to fly in the face of everything we stood for. Of course, we now know that the reality is nowhere near the nightmare scenario we first imagined.

Candid, face-to-face meetings are the most efficient way of thrashing out precisely what is needed and the best way of accomplishing that without client or host getting hung up on scaremongering or politics.

Efficient ways of working are good for web host and client alike. At the outset, we were unsure whether these efficiencies would outweigh the problems created by loosened change control. Experience tells us the risks were overstated.

Just as The Wire’s police department found that policing a small area containing a large proportion of those committing crimes made their jobs much easier, so we’ve discovered that being able to quickly deploy software that performs much closer in delivery to how it was planned in production is good for our clients and therefore good for us, too.

Some of the police officers in The Wire struggled to comprehend the move from cracking skulls and rounding people up into police vans to a softer, more observational brand of policing.

While there are surely no web hosts out there going round cracking skulls, some are using communication tools that are almost as primitive. DevOps means the days of the ticketing support system are numbered. Slow back-and-forth correspondence with an approximate response time doesn’t cut it with a DevOps approach.

Using instant messaging tools, like Slack, allows for host-to-client correspondence that is as flexible, collaborative and agile as DevOps practice.

In summary, a DevOps Hamsterdam can work in external web hosting and is almost certainly the future. That can only happen once an acceptance has been reached by a web host that times have changed.

At that point, it is possible to move away from fears of a lawless free-for-all and start planning for a style of web hosting that works for clients and is suited to the workflow of today’s developers.