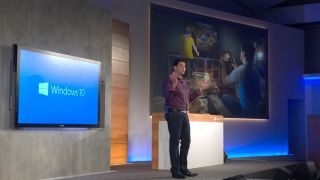 What Microsoft announced about Windows 10 last week is designed to whet our appetite, and as usual, Redmond is talking about what it intends to do without giving all the details. At the event, TechRadar Pro had the chance to ask Terry Myerson to explain a little more.

Project Spartan, he told us, is a new browser, but not a new rendering engine – it even supports ActiveX controls. And Internet Explorer isn't going away, either.

"Every Windows 10 device will include IE 11 also. If for some reason the customer has used the extensibility and needs that, or if the enterprise wants to have Windows 7 devices with IE 11 and Windows 10 devices with IE 11 [it's there]. But probably what we're currently calling Project Spartan will be the go to browser for browsing. The enterprise modes are in Project Spartan and IE 11."

So is that rendering engine still Trident and the Chakra JavaScript system from IE? "Yes –the evolution of those going forward. But there's all these legacy frame extensions that were possible that used to bog down IE and we've moved away from those. ActiveX is still in the rendering engine too, but there were browser helper objects and a bunch of stuff like that, and that's the stuff that's not in Spartan."

That's a less drastic change than some rumours have suggested but it means that businesses can use Spartan without having to worry about whether Flash works, while getting rid of the worst drag on performance and security. Myerson wouldn't be drawn on whether the changes in Spartan include a new model for browser extensions that's more like the Chrome and Firefox one – he simply told us: "We haven't shared anything yet."

Myerson wasn't giving away much about Windows RT. "We are working on an update for RT as well and haven't worked out all the details yet," he said. Windows RT has never had all of the features of Windows 10 – and Windows 10 on a phone doesn't have all the features either (there's no desktop on a phone), so it's too soon to say that this means Microsoft is abandoning RT.

Always up to date

Windows as a Service means you can always have Windows up to date, but it doesn't change how you pay for Windows. "The OEMs that ship windows – there's a licence fee to ship Windows and that covers the customer for the supported lifetime of the device," Myerson explained. But you do only pay once, and not any kind of yearly fee.

That means you might still be using a version of Windows that came with your PC, and today OEMs don't support PCs for as long as Microsoft supports Windows. He freely admits that's something Microsoft is still working on.