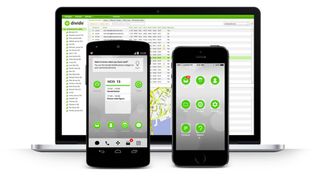 Bring-your-own-device (BYOD) firm Divide has announced that it is joining Google. The company's platform allows users to separate personal and business data on the same mobile device, using a containerized approach, giving IT administrators access to manage the business side of things.

Divide is available on both Android and iOS. It offers a free basic package that gives users a split workspace and tools to manage the app and a more sophisticated package that costs $60 per user per year that provides tools for IT managers.

October's funding was earmarked to accelerate growth and develop partnerships with companies such as IBM, Vodafone, Verizon and Tangoe.

"We're thrilled to announce that Divide is joining Google," the firm said in an announcement on its website. "The company was founded with a simple mission: Give people the best mobile experience at work. As part of the Android team, we're excited to continue developing solutions that our users love."

In its announcement, Divide thanked its supporters who have used the service and provided feedback and assured customers that the platform would continue to operate as usual. Financial terms of the deal have not been announced.