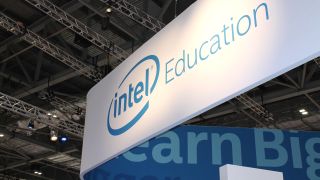 Intel acquired California-based, education-focused startup Kno in November 2013. Since then, the company has developed the multi-device platform of the same name in a bid to improve teacher performance, foster student engagement and drive learning success in the classroom.

John Galvin, vice president and general manager at Intel Education, says that the philosophy of the team spearheading Kno harks back to Intel founders Gordon Moore and Robert Noyce, who placed education high on the company's agenda from the start.

Intel is now using Kno to faciliate adaptive learning in the classoom, using analytics to measure student performance and engagement in a way that allows them to select topics that they are interested in. It has also launched the Intel Education Access Point, an enterprise-grade router designed to provide connectivity to student and teacher devices both inside the clasroom and out thanks to built-in 3G support.

TechRadar Pro spoke to Galvin at the BETT 2015 expo to find out more.

TechRadar Pro: Why is education a big deal for Intel?

John Galvin: The team we have working on education goes back to our founders -- Gordon Moore and Robert Noyce -- who felt that education was important. Part of what we do as a manufacturer is crazy hard so it's in our best interest to teach people science and math and critical thinking skills.

It's also become as much a social endeavour for us, investing in the communities that we go into. Over the past ten years as a company Intel has invested about a billion dollars in education. That's not just pure dollars - that's putting time, equipment and going in working and training teachers. That's really how do you transform education.

Three years ago I looked at what we were doing and what was happening in education, and felt it was time for us to make a big change. Education was starting to go through a transformation. It wasn't just about bringing computers and technology into classrooms, it was also how they were being used.

Teachers were essentially incorporating computers into a full day's lesson plan and encouraging students to go out and search for information rather than what had been happening before that, which was put your tablet or notebook away -- the "lids down" story.

TRP: Tell us about Intel's education team and how it's encouraging the use of tech in the classroom.

JG: We formed an entirely new team which is the only vertically-integrated team at Intel. We work on multiple verticals at Intel but that's typically from a sales focus and how we deliver products as part of a solution.

We take much more of a holistic solution approach that's end-to-end. We design devices for use within a classroom that are ruggedised, water resistant, dust resistant and can stand up to student use every day over the course of a few years.

We work on applications to be able to make that into an education experience -- so scientific applications, reading, writing and arithmetic. About a year ago we acquired a company called Kno, which allows us to deliver a digital curriculum.

Kno also has an analytics platform so we can capture about two-hundred data points about the student, how they can engage with the data, and then map that to their assessment results.

It means that the teacher can essentially get a real-time dashboard about how students are performing and do essentially real-time remediation that's required, or advance students based on what they're fascinated with, so it's a very different approach for us.

The final aspect is how we prepare the teachers for technology coming into the classrooms. As a company we've trained over fourteen million teachers around the world, and we continue to train and engage with them and help them develop their digital lesson plans.

TRP: Is the Kno platform cloud-based?

JG: It can be, but that's not how we use it because a lot of schools that we work with don't have great connectivity. Even in the UK, when you get to a classroom, there's not necessarily connectivity there for thirty or more students to access content and have a good experience.

We support cloud and advise schools on how to implement a cloud architecture, and we work very closely with Google on Chromebooks and are a big supporter of them. We developed a Chromebook ourselves that Lenovo is taking to market.

Most of the applications are designed to be able to work in an environment where there's either low or no connectivity. That's one of the three areas we're really focused on. We recently announced the Intel Education Content Access Point, which is really three devices in one.

That was based on an ideation session we did around a year-and-a-half to two years ago now, where we recognised that in emerging markets there's really no connectivity, but in mature markets it's low connectivity.

TRP: Why does the education sector need another access point?

JG: Although there are lots of access points that are being used in education, often schools won't put in an enterprise access point -- they'll put in consumer access points that can't withstand all of those students trying to get information at the same time. So we designed an access point that will handle fifty or more students, and there's also storage in the device.

If a teacher has set up their curriculum where they're going to tell their students to go after a piece of content, they don't have to go out to the internet. They can just go out to this device. It's going to look and feel to them like they're going to go out to the internet to get it, but in fact they're just getting it off a local device. It has 3G integrated, so when we're going into this no-connectivity markets, teachers can use 3G to download the content into the device, and it has six hours of battery life.

TRP: Was the plan to always push the access point into developed markets?

JG: When we developed it, we saw it predominantly going into emerging markets, but as we pilot it and talk to teachers, we found that mature markets want the device too. I've been talking to a teacher who has been doing more are doing studies outdoors, so they're taking their science classes outside. She said that she took the access point with her and students could access everything they needed for a true outdoor classroom.

Current page: In the Kno