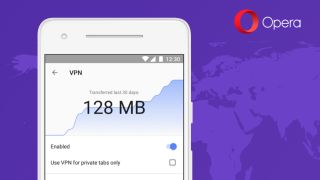 Opera has announced that it is adding a built-in VPN to its Opera for Android browser in an effort to better protect its users safety online.

The company is already quite familiar with VPNs as it launched and later discontinued its free VPN app for Android called Opera VPN.

Now the company has taken things a step further by including a VPN inside its Android browser and beta users around the world will be the first to test out the new feature.

Opera explained its decision to add a VPN to its browser in a blog post announcing the new feature, saying:

“This exciting new feature in Opera for Android is designed to empower you with increased control and privacy of your browsing. You no longer need to download separate, paid-for apps to shield your browsing when on public Wi-Fi. Just tap on “Settings” in your Opera browser and activate VPN.”

Users will no longer have to download a separate app to protect their devices with a VPN and Opera's solution also offers unlimited data and the company has said that it won't keep any usage logs.

Locations are limited by region and you will have the option to connect to servers in Europe, America or Asia though you won't be able to choose an exact server location by country.

The company also offers a free, unlimited VPN as part of its desktop web browser and you can try it out now to get a feel for how it will work on mobile.