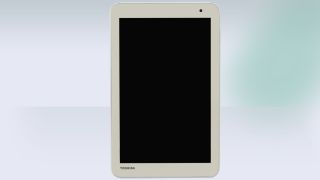 The new Encore 2 from Toshiba

Update: Toshiba confirmed that the processor powering the Encore 2 tablets is the Z3735F, a Silvermont part with 2MB of cache and a 1.33GHz base frequency.

Toshiba added two new tablets to its portfolio, a 8-inch model that replaces the original Encore (launched last year at IFA) and a 10.1in Encore 2.

Both models, WT10-A and WT10-B, will be running Microsoft's newly announced Windows 8.1 with Bing, a cheaper version of the operating system that is available only for manufacturers.

There's also a one-year subscription to the full version of Office 365 (complete with Powerpoint, OneNote and Outlook) with one hour of Skype per month plus Fresh paint and Xbox One SmartGlass apps bundled.

The two SKUs also have a similar hardware specification. They run on an Intel Atom-based quad-core processor (probably Silvermont based) with 32GB storage capacity, a 1280 x 800 pixel resolution, a rear 5-megapixel camera with a front facing one, two speakers featuring Dolby Digital Plus and up to 8.5 hours battery life.

When it comes to expansion and connection capabilities, the new Encore 2 com equipped with Bluetooth 4.0, Wi-Fi, a microUSB 2.0 port and a microSD card slot.

The bigger of the two weighs 555g and has 2GB of RAM while the smaller one weighs 385g but has only 1GB of system memory. The latter is also missing a micro-HDMI connector.

Expect the smaller version to cost much less than the bigger one; other than the lower specification, its screen size means that Toshiba won't pay a penny (or a cent) for the Windows license.

Pricing has yet to be announced and Toshiba stated that both should be available from August onwards.