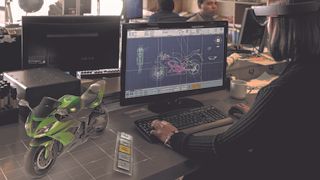 Microsoft's HoloLens is a powerful but pricey mixed reality headset that's found uses in industrial design and on the battlefield. Now, it looks set to become much more accessible for home users and smaller businesses, with apps for mobile devices that remove the need for costly hardware.

In April, Microsoft is releasing a version of its Dynamics 365 Remote Assist app for Android. This will let you share a video from your phone with another person, who can then add annotations that will appear over the live feed on your screen.

The Android app won't contain all the features of the version designed for HoloLens headsets, but all the essentials will be there.

iPhone and iPad owners, meanwhile, will soon get a tool called Project Visualize for displaying models in augmented reality.

We had been hoping to see a new generation of Mixed Reality headsets for gamers, but it now looks like Microsoft might be focusing on the more lucrative business market instead. It will be interesting to see what changes the second-generation HoloLens brings to tempt businesses when it's announced later this year.