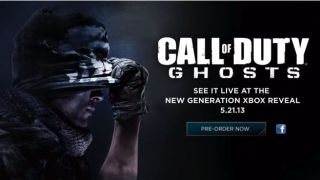 Don't get spooked, but Activision has officially confirmed the next chapter in the CoD franchise is Call of Duty: Ghosts.

"Everyone was expecting us to make 'Modern Warfare 4,' which would have been the safe thing to do," said Mark Rubin, head of developer Infinity Ward, in an announcement today. "But we're not resting on our laurels."

You can scope the mask-tastic trailer below, but the real payoff comes at the end. Turns out we're in for a live demo at the new Xbox reveal on May 21, signaling we could be in for an event similar to the PS4's quasi-unveiling.

Gamers can pre-order Ghost now through global retail outlets, but the title officially goes on sale Nov. 5. It will be available for the Xbox 360, PS3, PCs and, of course, "next generation platforms." We've heard that recently about another AAA game, come to think of it.

Some news was meant to be bite-size, like our delectable blips.