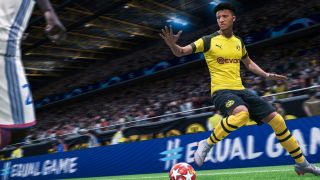 One area which has been totally revamped in FIFA 20 is set pieces. Most notably, Free Kicks have changed dramatically from FIFA 19. You’re no longer swinging in the wind when you shoot, as the developer has added a targeting reticule to the process, as well as the ability to add different kinds of spin to your shots.

In this guide we’re going to run you through the new mechanics step by step, explaining what kind of spin you should use for any given situation, how to change positioning and how to control the reticle when you take that fateful, often game-changing shot.

The new method is much more tricky than in previous years, but it must first be noted that you can actually turn off the new targeting system by pressing up on the D-Pad while you’re preparing to take the free kick. Just be warned that your accuracy may be stunted as a result.

How to score free kicks in FIFA 20

When the inevitable foul occurs and you’re presented with a free kick, first you want to think about your positioning. Flick the right stick left and right to change your positioning around the ball, from normal to wide and straight. Each time, think about the way the ball is going to curve if you hit it from that angle and determine where you feel most comfortable shooting from.

Then you want to use the reticle to aim the shot. If you’re aiming without spin, you want to drag it to the top left or right of the goal, right in the sweet finesse spot where you know the keeper can't reach it. Try and lock the left stick in place when you’ve found your spot. This feels unnatural, but you’ll get used to it. Aim lower if you want to put your laces through the ball and drive it into the bottom corners of the net with pure power.

Now you need to consider the power with which you hit the ball. There’s not too much to worry about here. The further out you are from the goal, the more power you need, but when you’re close up you barely need to hold it. This is a fairly easy rule to remember.

Now, you can ignore this feature if you want, but there is also a shooting mini-game to consider where you can tap Circle/B once more when your feet come in contact with the ball to increase accuracy. This is another feature that just demands practice, so keep playing Skill Games until you master it.

Another thing to note is that you can tap L2/LT to call for a secondary taker and R1/RB to call for a Third Taker. This is important if you want to mislead your opposition by faking the shot with the extra players, or you’d like to take the shot from a different angle provided by your teammates.

Advanced Free Kicks: How to use spin in FIFA 20

If you want to fully master free kicks in FIFA 20, you want to consider the effects of spin, which is an entirely new mechanic for the game. Spin is controled via gesturing with the right stick on the run-up to kick the ball. There are a few types of spin: Top Spin, Side Spin, Mixed and Knuckle Ball. Luckily the gestures appear when you take a free kick, so let’s explain what each one does.

Top Spin and Knuckle Ball are fairly similar. They will curve the ball down over the defensive line, so use these if you’re shooting for the bottom corners of the net from afar.

Sidespin will, as you can guess, curve the ball to the side, but bear in mind that you have to spin in the reverse direction to the side of the goal you’re aiming for. So if you’re going for the top left corner, drag the right stick anti-clockwise, and vice versa.

The spin can be very aggressive, so you want to be quite light with your gesturing, and you don’t want to put your reticle in the top left corner and add side spin else it will miss. You want to move the reticle closer to the centre of the goal, then add enough spin to send it curling into the top corners. This is the crucial tip to help you score Free Kicks in FIFA 20.

With all of the above in mind, you should now be a master set-piece taker and you can impress your friends with your kick-taking skills.