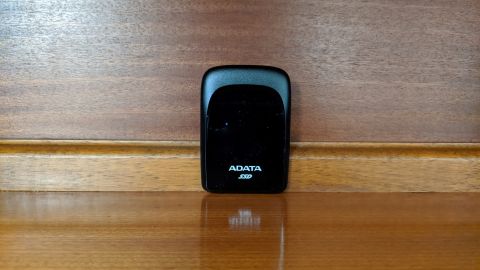 The SC680 from Adata lacks any USP other than a budget pricing. There are models out there that offer a far better price/performance so if the former is your main/only concern, we’d advise you to check for last-minute deals.

SSD Prices are falling fast and you can now pick up a super cheap SSD (internal of course) for less than $80. Amidst the free falling pricing of parts, Adata has unveiled a new external SSD, the SC680, which targets a price-sensitive audience looking for the best value for money.

The design of the SC680 is functional in nature; black glossy plastic, tiny footprint with a logo on top, a light and a Type-C connector; a blue version exists as well. It weighs 35g, making it one of the lightest external SSDs on the market and at 87 x 61 x 10mm, it is small enough to be carried around anywhere. It could almost fit into a matchbox.

You get two short cables (Type-A to Type-C and Type-C to Type-C); not ideal as they both offer less flexibility and are likely to leave the drive dangling on an edge, rather than say, positioned in a safer area. Unlike the SD600Q, we wouldn’t want to drop the SC680 on a hard surface too often; the plastic enclosure feels brittle and is likely to crack.

Here’s how the Adata SC680 performed in our benchmark tests:

The drive was formatted as an NTFS drive; and the controller used is the Silicon Motion SM2259XT controller which is DRAM-less. There’s no software bundled with the SC680 but you can download OStoGo and HDDtoGo.

The first allows you to install Windows 10 via your USB storage device, and the second app allows you to “help you keep your personal data available on the road”. Both are relatively long in the tooth and there are more robust applications out there than can also do the job. We’d strongly suggest that you get a cloud storage solution to safeguard your data against theft and loss.

We believe that the SC680 uses 3D QLC NAND which is newer, slower but also cheaper; it is likely to be the same parts found in the SD600Q.

When put to test, the performance of the SC680 was very similar to that of the SD600Q, that is average at best. We managed to move a 100GB file in 38 seconds, which translates into a real-life transfer rate of 263MBps. Another test, CrystalDiskMark, reached 426MBps on read and 391MBps on write speeds; Adata quotes up-to-speeds of 530/460MBps respectively.

The low performance can be attributed to the DRAM-less nature of the device as well as the use of QLC and tests carried out on other benchmark applications yielded similar results. These were carried out on a Dell XPS 15 9575 2-in-1 laptop. Note that this notebook only has Type-C ports and we used the bundled connector to perform our benchmarking.

There are quite a few competitors out there in this price range.

Let’s start with the most potent candidate, the SD600Q which is the older sibling to the SC680. It is available in more colours, it is shock resistant but not waterproof and has a flat USB port. At $99.99 for the 960GB, it gets our vote.

Pioneer has a USB 3.1 Gen 1 model that cost $60 while the 960GB model retails for just under $100. They are, on paper, slower but the numbers we got from the SC680 were very similar to the SD600Q which leads us to believe that the APS-XS03 should perform similarly.

A newcomer, Teamgroup, sells a 480GB external SSD that is waterproof and dustproof for a mere $49.49 (including a coupon) at the time of writing.  The 960GB PD400 model drops down to $94.49, the cheapest large capacity external SSD we have seen in a while with a design that matches the Samsung T5 portable SSD.

You definitely won’t buy the SC480 for how speedy it is especially compared to Teamgroup’s offering. Granted we haven’t tested the latter but TG ranks consistently amongst the lowest priced SSD deals on offer. A 20% saving on the 480GB model is nothing to be sniffed at.

Performance-wise, the SC680 is solidly anchored in the middle of our table. It is a bit faster than the SD600Q but a far cry from what we’d expect from a USB 3.2 Gen 2, even when tested on a Thunderbolt capable device.

Potential improvements for 2020? 96-layer NAND chips are really soon now so it is likely that they will end up in the follow-up model. At the end of the day, the tweaks that can be made to a product as mature and as straightforward as an external SSD are very small. Price is where the competition will happen and this is, sadly, a race to the bottom.