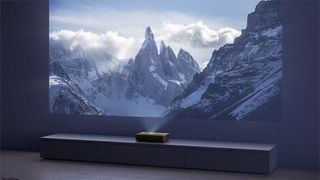 Projectors use to be a big, hot and very expensive, but in recent years, a new generation has overcome these difficulties, fueled by consumer desire to have a portable, detailed screen.

Great for the boardroom for businesses of any size, although it was relatively expensive at launch, you can now get your hands on one for just $1698 from Gearbest when you use 1VQSEIVKKQ at checkout.

We haven't found a cheaper native 4K ultra short throw projector elsewhere. Xiaomi managed to design a great product that delivers on all major fronts. The projector can be placed very close to the target surface and will produce screens with a 300cm diagonal.

The Xiaomi Mijia has a rated brightness of 5,000 lumens and a contrast ratio of 3000:1, meaning that it only needs to be 50cm from a surface in order to produce a 150-inch display. Note that it does come with a smart component that, surprisingly enough, runs on Android 6.0; which can be left alone for many users.

Other noteworthy features include a pair of speakers, DTS-HD and Dolby Audio compatibility, MI user interface, a 25,000 hour lamp life, plenty of ports (three HDMI, USB 3.0, two audio, optical and Ethernet) and most importantly, a true, native 4K resolution thanks to a Texas Instruments DLP chip.

It doesn’t do HDR-10 though, no voice control, no smart apps, is not 3D compatible  and there’s no Bluetooth plus we’d love if it had included an integrated soundbar.