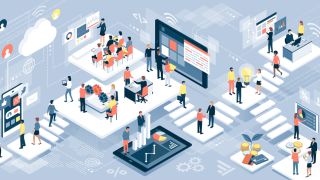 The workplace of the future is set to be more interactive and collaborative than ever before as new technology helps bring workers all over the world closer together.

That’s the utopian view put forward by Microsoft and Qualcomm, who teamed up at this week’s Snapdragon Summit in Hawaii to present their view of what the office of tomorrow may look like.

Unsurprisingly, the latest technological breakthroughs from both companies play a key role, particularly the newest releases from Qualcomm, including its newly-announced XR2 mixed reality chipset, the first to feature 5G connectivity, and a host of devices powered by the new 8cx and 7cx PC hardware.

“Digital transformation...is a phenomenon that is fueling organisations - both their success, and their failures,” Nicole Dezen, GM for Microsoft Consumer & Device Sales UK & Ireland, told the event.

“And it really starts with people, and we have to empower them with awesome technology, enabling them to do more, to create more, to solve more.”

Dezen highlighted how Qualcomm’s PC portfolio has been greatly enhanced with its new 7cx and 8cx chipset lines, which will begin appearing in more devices in 2020. The chips have already powered recent Windows devices like the Microsoft Surface Pro X, but both Qualcomm and Microsoft see the sky as the limit.

“This new innovation will empower businesses, front line workers and students around the world...we have seen incredible innovation from PC manufacturers with the premium Snapdragon chips, now we get to bring this to the lower cost devices,” Dezen noted.

Microsoft is also providing support on the software side, with Dezen noting how the company’s Device-As-A-Service offering, which provides not just hardware but software platforms such as Windows 10, Office 365 and Azure, can greatly free up IT resources at businesses of all sizes, as well as providing greater insight to enterprise systems.

“This is a complete connected solution,” Dezen said, “that unlocks the creator in all of us, and fuels teams, helping businesses to secure their users and their devices.”

“Digital transformation on the intelligent edge has never been more achievable,” Dezen concluded, “through our collaboration with Qualcomm and PC manufacturers, intelligent edge devices are faster, more affordable, more functional and more connected.”

Dezen’s enthusiasm was echoed by Qualcomm, with the company’s senior director of product management, Miguel Nunes, describing how 5G connectivity in particular could transform a wide number of businesses.

“5G will offer exciting opportunities that will accelerate digital transformation,” he said, noting how businesses could employ private mmWave networks to boost their productivity, security and collaboration capabilities.

Qualcomm took the wraps off its XR2 mixed reality chipset, the first equipped with 5G connectivity, promising not just boosts in terms of consumer use cases such as immersive gaming or cinema experiences, but also in enabling benefits for businesses too.

Top of the menu is an attempt to take collaboration to the next level, allowing workers across the globe to come together in the virtual world.

During the keynote, a demo from VR experts Spatial showed how employees from different offices, sporting advanced and highly-detailed avatars, could participate in a design pitch meeting to share ideas and thoughts.

This collaboration allowed workers to get a much greater insight into the particulars of a project and bring in both 2D and 3D content, giving a much higher chance of success - as well as cutting down on expensive and environmentally-unfriendly long-haul travel.

Qualcomm also showed off a demo with its partner Deutsche Telekom where a field agent equipped with an XR headset was able to communicate in real-time with a controller to walk through repair processes on a broken-down car.

Such use cases could greatly improves success rates on repair call-outs, as well as improving worker safety and customer satisfaction in a job well done.

So whatever your industry, it seems that the world of work is set to get more connected and collaborative than ever before - and it could be a Snapdragon-powered device that does it.