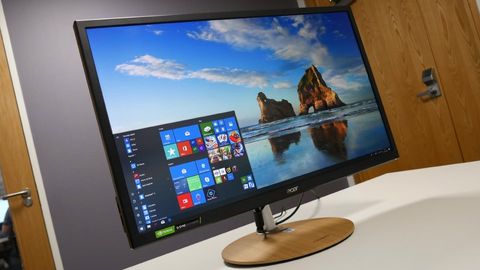 Never the twain shall meet. That much you might say of professional displays and gaming monitors. After all, they represent two wildly different remits. The former is all about accuracy, the latter demands speed and pure visual pizazz. The consequence is typically very different features, performance tailored for each specific market and an impossible task delivering on both remits in one monitor.

Enter the Acer ConceptD CP7 CP7271KP, a new 27-inch 4K model. Ostensibly, it’s a pro display aimed at content creators. To that end, it claims strong colour accuracy and good support for a number of critical colour spaces from a high quality IPS panel. It also comes with a glare-reducing hood. So far, so par for the pro display course.

Dig a little further into the spec list, however, and you’ll find gaming-friendly features like 144Hz refresh, and both Nvidia G-Sync Ultimate and DisplayHDR 1000 support. While those are proven technologies with clear benefits, they unambiguously add to the cost of a display. So, the question is whether they improve the experience for pro content creators.

At $2,199 in the US and £1,999 in the UK, the Acer ConceptD CP7 is very much a premium product. It absolutely has features and specifications to justify that price point, but whether the mix on offer makes sense in a professional context is the Acer’s challenge.

Acer also supplies the ConceptD CP7 with a clip-on hood for the upper bezel and two sides of the display. As ever with such attachments, they do little for the aesthetics, but then you don’t have to fit them unless you feel you would benefit from the reduction in glare they provide.

If the Acer ConceptD CP7’s spec list is a somewhat schizophrenic mix of professional and gaming features, its industrial design will certainly hit the spot for content creators. The overall look is understated and minimalist, with an unusual wood effect (rather than actual wood) flourish for the screen’s base.

That base is adjustable for both height and tilt, but lacks both swivel and support for rotation into portrait mode, both of which you might expect to see in a display of the class and price point. A more conspicuous omission, again given the pro remit and lofty price tag, is that of USB Type-C connectivity. For anyone planning to drive the ConceptD CP7 with a modern laptop, it’s a great pity you don’t have the option to connect via a single cable that enables the video signal, peripheral connectivity and charging of the laptop itself.

As for the specification of the panel itself, in many regards it’s what you would expect from a professional 27-inch monitor. The 4K resolution and IPS panel technology are probably a given. In terms of colour accuracy, the ConceptD CP7 is Pantone Validated and Acer claims its factory calibration delivers a Delta E of less than one, which is reassuring.

Elsewhere, it’s a little more complicated. Acer rates the ConceptD CP7 as capable of 99 per cent of the Adobe RGB colour space and 93 per cent of DCI-P3. These are good numbers,  but arguably they aren’t quite true professional grade, which would be fully 100 per cent of Adobe RGB and in the high 90s for DCI-P3.

Exactly how much of an issue that is for your workflow is a question only you can answer. However, it does put the inclusion of support for up to 144Hz refresh, Nvidia G-Sync Ultimate and DisplayHDR 1000 into a slightly problematical context. This is a very expensive monitor and much of that price is accounted for by the inclusion of the high refresh, G-Sync and an HDR certification that includes an expensive backlight with local dimming.

Acer isn’t quoting exactly how many local dimming zones the Acer ConceptD CP7 offers. But we suspect it’s the same as the company’s 27-inch 4K gaming monitors with HDR support, such as the Predator X27, which packs 384 zones. In fact, the broader impression is that this monitor is very closely related to those gaming displays.

Indeed, there are further features that imply the Acer ConceptD CP7 is a repackaged version of those gaming displays, such as the inclusion in the OSD menu of an option to enable overlaid crosshairs for use in shooters and switchable pixel overdrive.

When it comes to the basics, the Acer ConceptD CP7 is a very sweet display indeed. At 27 inches across and with a 4K pixel grid, it’s extremely sharp and very detailed. You’re looking at a pixel density of 163 pixels per inch, which isn’t far off what Apple would class as a Retina Display.

The IPS panel looks fabulous, too. Even in SDR mode, you can crank the backlight to fully 500 nits, which is very, very punchy. In HDR mode, it peaks at 1,000 nits, which really is very, very bright. True HDR content positively zings on this display and thanks to ever-improving support for HDR in Windows 10, it’s a feature that can be used daily in a professional context. Long story short, it’s possible to have SDR content at practical brightness levels nearer 200 nits while HDR content gets the full 1000 nits treatment.

Ayway, the panel itself is fitted with a very smooth, clean anti-glare coating with little to no evidence of the sparkle that used to be a problem with the coatings of many IPS monitors. Predictably, the ConceptD offers the usual IPS signature image quality attributes including excellent viewing angles and natural, pleasing colours.

Less convincing in this context is the 144Hz refresh and Nvidia G-Sync support. Now, high refresh is very pleasant, even when you’re not gaming. The Windows interface feels more direct and responsive. However, it’s a costly feature to implement and that money, arguably, would have been better spent improving the colour fidelity of the IPS panel even further.

Similarly, fitting the ConceptD CP7 with the full-spec G-Sync Ultimate circuit board doesn’t come cheap and yet also doesn’t add much to this screen’s professional tool set. Adaptive sync really isn’t awfully relevant, here. On the other hand, a wider range of colour space presets in the OSD would have been.

The Acer ConceptD CP7 is a great looking monitor with a very strong overall feature set, as well it should be at this elevated price point. As a pure professional display, it’s good rather than great. Support for colour spaces is reasonable, rather than excellent, given the price and while the inclusion of HDR 1000 makes for a versatile display, it comes at quite a price while only adding marginally to the ConceptD’s execution of its pro remit. Ditto Nvidia’s pricey G-Sync Ultimate tech. At the same time, the lack of USB Type-C support is jarring.

Overall, the Acer ConceptD CP7 isn’t entirely convincing as a true pro display. Instead, it makes more sense as a high end luxury all rounder. If you want the very best colour accuracy and gamut support, your money would be better spent elsewhere. But if you can afford the asking price and seek a monitor that does it all - content creation, gaming, HDR content playback, the works - then the Acer ConceptD CP7 has a heck of a lot going for it, albeit it at quite a price and assuming you’re OK without USB C.