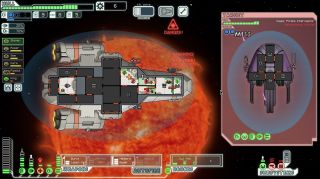 Ever wanted to lead a crew of misfits and aliens on an adventure across the galaxy (and are already done with the Mass Effect series)? Then today's you're lucky day. Thanks to the Epic Games Store, that's just what you'll be doing today – and all without spending a penny.

One of the games of the decade, FTL: Faster Than Light, is free to download from the Epic Games Store on PC today, a top-down, pixel-art classic that sees you darting across the universe evading a cosmic threat, maintaining a wonderfully-evocative ship and engaging in starship battles and adventures along the way. Starting life on PC and Mac before making the jump to iPad, it's one of our favorite games of the last ten years.

If you want to try your hand at being a Han Solo or Captain Kirk, you've got to act fast though – the free download period expires at 4pm GMT / 11am ET today.

But FTL won't be the only chance this week you'll get to grab a free game from the Epic Games Store. Like Ape Out earlier this week, FTL is part of the '12 Days of Christmas' promotion, from which the Epic Games Store will be offering up a freebie game every day until the end of 2019. Just keep checking back daily to see what's up for grabs.

And, if you're after something specific, there are some deep discounts to be had in the Epic Games Store Holiday Sale, too.