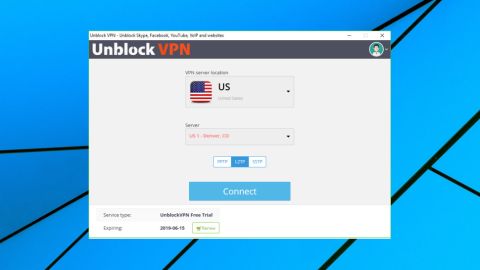 Unblock VPN is fast, but has few other pluses. Take the free trial if there's a site you can't unblock elsewhere, but most people will be better off with another VPN.

As you'll probably guess from the name, Unblock VPN is all about enabling access to blocked websites and internet services. Netflix isn't on the list, but the company claims it can unlock, BBC iPlayer, Hulu, Sky, ABC, Fox, Facebook, YouTube, Twitter, Skype, VoIP and more.

The location list isn't as impressive, with IPs available from just nine countries. Most of this VPN's servers are in the US and UK, with others in Canada, Germany, Sweden, Netherlands, Czech Republic, Slovakia, and Israel. P2P is supported on the Swedish server only.

Unblock VPN has clients for Windows and Mac only. There are plenty of setup tutorials for other platforms, though, including Android, iOS, Linux, and routers.

Unblock VPN also offers a free 3-day trial. It's horribly restricted with a 5-minute connection time limit and a maximum of 20 connections a day, but it's enough to confirm that it unblocks a particular site, or maybe run a speed test, and it's more than you'll get with many providers.

Unblock VPN's terms of service and policies page is truly amazing, in the way it does almost nothing right. It's absurdly long at more than 6,000 words. It uses obscure legalese rather than clear English. It constantly refers to the 'legal order of the Czech Republic', something that we'd guess will be a total mystery to most potential customers. It's poorly organized, and leaves sections of up to 600 words in single blocks, without paragraph formatting, making it very difficult to read. And even if you fight through all that, it doesn't tell you everything you need to know.

The company does provide a simple no-logging statement, claiming it "does not track the user's activities". But just as you're feeling reassured, it hits you with this: "The Provider is allowed to save server logs that are created or processed when ensuring the services provided by the Provider or when performing the Contract, for maximum of 3 calendar months from their acquisition. Server logs are not used for tracking of transmitted content or censoring of the User’s Internet activities."

What might these logs contain? We don't know, but the policy says the data it to help with the "potential identifying of illegal activities which are in contradiction to these Terms and Conditions."

Whatever Unblock VPN is keeping, it's presumably enough to either find out something about what you're doing, or to link you to an internet action recorded by someone else (the IP address you're assigned and the time you were using it, for instance.) If you're just using the service to unblock a streaming site somewhere, this might not matter. If you're doing anything privacy-critical, it's going to be more of a problem.

Getting started with Unblock VPN required handing over a little more information than we'd like – our name and country, as well as email address – but it was quick and easy, and our service password turned up moments later in an email.

The main Unblock VPN Windows client is, well, basic. You're able to choose countries and servers from a couple of lists, select a protocol (PPTP, L2TP and SSTP only, OpenVPN must be configured separately), connect and disconnect with a click, and that's it. If you're hoping for a kill switch, DNS tweaks or anything else, then prepare for disappointment: there's nothing more, not even the most basic of settings.

Checking the client's executables confirmed that this is a very minimal app with almost no functionality beyond creating and establishing a native Windows VPN connection. Our version also hadn't been updated since May 2016.

The client did at least connect quickly. Although there's no kill switch, it handles connection drops reasonably well, instantly displaying a notification about the problem.

Despite Unblock VPN's name, it didn't unblock many websites in our tests. We had success with US YouTube, but that's a very easy service to access, and the service couldn't get us in to BBC iPlayer at all.

Life got more complicated when we tried to stream Netflix content. We had success via the Israel server, but were blocked from the UK, and, bizarrely, connecting from the US servers only got us certificate-related privacy errors.

For all its other problems, Unblock VPN did at least deliver on speeds, with UK and US servers averaging more than 60Mbps, and Israel hitting 45-50Mbps.

Unblock VPN is surprisingly speedy, but that's not enough to compensate for the tiny network, the basic clients, the lack of features, the vague private policy, and, despite its name, the inability to unblock BBC iPlayer and US Netflix. Take the free trial if you want to see if it can unblock something, but we think there are much better services around.