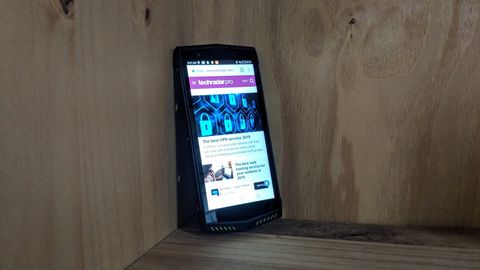 The Poptel P60 is one of the best value rugged smartphones on the market – don’t be put off by the gaudy design, because this handset packs more punch than you’d expect at this price point.

This is the fourth Poptel smartphone that has landed on our desk in the past six months and it’s the most powerful of the lot. After the Poptel P8, the P10 and the P9000 Max, here is the P60, the new flagship from this up-and-coming smartphone vendor.

Poptel sent us the sample and Gearbest sells the Poptel P60 for just under $260 (£210) at the time of writing. Note that, while this price includes delivery, it is exclusive of any taxes that may be levied by HMRC or the courier companies on behalf of the vendor. Want to buy tech from online Chinese retailers? Read this first.

The P60 aims to compete with the likes of the Cat S61 and the Samsung Galaxy S8 Active but at a much lower price point. Even then, the competition is pretty intense with the likes of the Oukitel P5000, ioutdoor X, Blackview BV8000 Pro and Ulefone Armor 2 all vying to capture the attention of a growing audience looking for smartphones that can take more than a few knocks and drops without shattering to pieces.

The P60 immediately invokes a sense of déjà vu, thanks to the slightly arched sides, the angular lines coupled with nearly a dozen screws, the blend of metal and rubber material, not to mention the gaudy color scheme (either green, red or orange). This template has been used by other Chinese manufacturers to spawn an entire generation of rugged smartphones.

There’s an audio port on the top with a flap covering it and a waterproof micro-USB port located at the bottom – but no USB Type-C connector here. The SIM tray is on the left-hand side and can be removed without requiring a needle. You can fit two nano SIMs (dual Standby) or one nano SIM plus a microSD card.

The right side contains four buttons: the volume rocker, power button, an SOS button and a dedicated camera button. At 167 x 78 x 13.8mm with a weight of 248g, this phone is on the lighter side of the rugged spectrum, and of course the other benefit weight-wise is that because it’s rugged, you don’t have to buy and use a case to protect it.

On the back is one speaker grill with two camera sensors (a Samsung 3P3 16-megapixel sensor, plus a second 8-megapixel affair), an LED flash and a fingerprint sensor. Uncharacteristically, there are some glossy plastic parts which are true fingerprint magnets and likely to get scratched.

The 5.7-inch 2K display adopts the popular 18:9 aspect ratio and is covered with an oleophobic Corning Gorilla Glass 3 panel, a welcome change from the competition. The Poptel P60 is also certified MIL-SPEC 810G as well as IP68, which means that it is water, dust and shockproof, and should withstand falls on concrete of up to 1.2m. Note that certification doesn’t mean testing, though.

The P60 packs a powerful punch thanks to a list of mainstream tried-and-trusted components. It’s built around a Mediatek Helio P23, a mid-range performance 64-bit octa-core ARM LTE system-on-a-chip launched in 2017, backed with 6GB memory and 128GB on-board storage.

Poptel claims that the smartphone is compatible with 31 global frequency bands with dual LTE/VoLTE as a key feature. As expected, it comes with 802.11n Wi-Fi (but no ac), Bluetooth 4.0 and a dual navigation system.

NFC is a welcome addition, one that has become more common in recent times at least in more expensive models, and the 5,000mAh battery should provide enough juice for the P60 to last a day.

The face recognition feature worked wonderfully well on the P60, unlocking the phone almost instantaneously. Just make sure that your face is well-lit for the algorithm to work its magic.

Here’s how the Poptel P60 performed in our suite of benchmark tests:

The device comes with an array of useful apps: Freezer aims to speed up your phone and save power by minimizing the resource usage of apps that you select. Privacy System is a containerized solution that hides files, contacts, apps and SMS messages via dedicated “private” apps. An SOS app works with the dedicated SOS button and can automatically send an SMS or make a call to a predetermined number while sounding an alarm. You can also use it as a PTT (push-to-talk) button if using the Zello app.

The graphics subsystem that powers the P60 handled our benchmarks without any hiccups, delivering solid enough but unimpressive performance numbers, far behind the likes of the Adreno 508 or the Adreno 510 solutions that power the Cat S61 or the AGM X2 – but it’s still enough for most tasks.

The 2K IPS display is as bright as it gets, and even if it’s no OLED screen, it is gorgeous to look at with a 427 ppi pixel density. That said, it’s really overkill for this device and we’d gladly swap it for a Full HD display with a slight drop in price.

As expected, the device comes with a standard install of Android 8.1 with a minimalist, clean user interface.

We prefer the subdued design of the now-discontinued Vernee Active but can live with the conventional one seen with the P60.

The BlackView BV8000 Pro costs the same but has half the storage, a smaller, lower-resolution display, and runs an older version of Android. It still ranks as one of our favorite rugged smartphones ever, though.

A newcomer to the market, the ioutdoor X features a very similar set of specs but costs more while offering a screen with a third of the pixel count and a smaller capacity battery. It is the thinnest rugged smartphone out there, though – at a mind-boggling 10.4mm – and outpaces the P60 when it comes to picture taking.

The Poptel P60 is a rugged smartphone that punches above its weight. At $260 (£210), it is one of the cheapest smartphones – rugged or not – to offer the 6GB/128GB combination of RAM and storage.

Coupled with a super-quick Face ID feature, dedicated camera and SOS buttons, a 2K display and IP68 certification, this handset delivers spectacular value for money. Poptel’s fourth rugged smartphone is without a doubt its best one yet if you’re looking for a mainstream model.