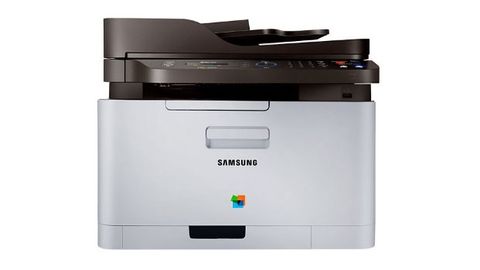 If you're after a high-quality text printer that can do the odd image too, the Samsung Multifunction Xpress C460FW won't disappoint, but its photo printing lets it down. There's a lot to like about this low-cost all-in-one laser printer, but we don't think it will be the model to crack the home market.

Generally speaking, inkjet printers are more versatile than their laser-printing counterparts, but laser printers such as the Samsung Multifunction Xpress C460FW win out on speed, running costs and the quality of its text printing.

The Samsung Multifunction Xpress C460FW makes inroads into the inkjet printers' territory with a host of features that are too often lacking in laser printers. But along the way, a few compromises have been made.

The Samsung Multifunction Xpress C460FW is an all-in-one multifunction printer, with fax facilities joining the usual printing, scanning and photocopying. At just under £310 RRP (at the time of writing, it's going for a little under £290 online), it's at the budget end of the laser printer market, making it particularly suitable for use in the home.

Its four toner cartridges (black, cyan, magenta and yellow) are £60 each on Samsung's own website, with the black tank lasting for 1500 pages and the colour cartridges for 1000 pages.

This works out at 4p a page for mono printing, and 22p for each colour page, which is a little high for laser printers in general, but about what you'd expect for a low-priced home laser all-in-one.

Its dimensions and weight also demonstrate that the Samsung Multifunction Xpress C460FW is geared towards the home and home office markets. At 14.3 inches tall, 13.1 inches deep and 16 inches wide, it takes up less room on your desk or shelf than most laser printers, and at just under 31 lbs it's light enough to lug around without a friend to help you. But if you want to use it on a shelving unit, make sure it's sturdy.

The Samsung Multifunction Xpress C460FW doesn't skimp on connectivity options. As well as a direct connection to your computer through USB, you can also network it using Ethernet or Wi-Fi, with WPS supported for easy set-up. Wi-Fi Direct allows you to print directly from your computer or mobile device without it having to join a network.

There are numerous mobile printing options too. You can print and fax directly from your smartphone, and scan to it too. The Samsung Multifunction Xpress C460FW supports NFC (Near Field Communication) connectivity, so you can print from a compatible phone simply by holding it next to the printer. This is one of the first laser printers to offer this feature, but unfortunately, it's not yet ubiquitous in smartphones either. You won't find it on an iPhone, for example.

You can also print images and documents directly from a USB memory stick, though as there's no colour screen (it has a two-line LCD just half an inch tall and two-and-a-half inches wide), you can't review pictures stored on your thumb drive before printing.

The Samsung Multifunction Xpress C460FW has a 150-sheet paper tray, which isn't enough for a shared printer in the office, but is probably sufficient for a home device. The lack of a secondary input such as a sheet feeder or a second paper tray is less excusable. If you want to switch to photo paper or letterheads, you have to remove the single paper tray and replace the standard paper before printing.

Somewhat bizarrely, the Samsung Multifunction Xpress C460FW lacks automatic Duplex printing too. If you want to print on both sides of the paper, you have to turn it over and manually put it back in the tray before printing the second side. For a £300 printer released in the second decade of the 21st Century, this is a bewildering omission.

An ADF (Automatic Document Feeder) that holds 40 sheets serves the scanner, so if you need to scan a pile of documents, you don't have to place them on the flatbed scanner one at a time. The printer's output tray can hold 50 sheets.

Design and build quality is generally very good. The Samsung Multifunction Xpress C460FW is fairly stylish as laser printers go, and it's pretty solid and robust, but the front door - which gives access to the toner cartridges - doesn't always shut well.

Print quality is great, if a step short of stellar. Not a particularly large step, though. The Samsung Multifunction Xpress C460FW will satisfy all but the fussiest of high-end user, with crystal clear, vivid characters, and no bleed or fuzzing at all.

Perhaps the thinner fonts could be a trifle darker, but this is a minor quibble. Overall, the text output is excellent, even at very low point sizes. It's fine for all business and personal uses, and virtually all desktop publishing tasks too.

Unfortunately, the Samsung Multifunction Xpress C460FW's is less capable as an image printer. Not that it's terrible. Our mixed text and graphic flyer came out reasonably well, with clear, readable text and reasonable pictures, though some signs of banding were evident in areas dominated by solid colours and there was a thin strip of lighter print running the length of the page on its right-hand side.

This lighter strip and slight banding also affected our A4, plain paper photo print. Again, this was far from poor - we've certainly seen worse from a colour laser printer - but these faults, along with slightly subdued colours, mean it won't satisfy anyone who needs outstanding image printing. It's fine for internal corporate handouts, for example, but a graphic designer is likely to need something better to check his or her layouts.

Switching to photo printing on glossy photo paper defaults the output quality to 'best', but the results could be better described as 'mediocre'. The colours were a little bolder (but by no means outstanding or vibrant), but inconsistencies found in plain-paper printing remained.

We still got a vertical stripe of lighter print on the right-hand side of the page, along with a horizontal quirk in the centre of the print-out and numerous marks caused by the rollers that carried the paper through the printer.

Our greyscale ramp wasn't as smooth as it should have been, and it looked faintly blue in places too. If you need a photo printer, don't get rid of your inkjet to make room for a Samsung Multifunction Xpress C460FW.

In our speed tests, our 20-page text-only document took one minute, 19 seconds to output, with our high-quality A4 photo print-out appearing in 49 seconds. Neither speed is anything to write home about, but both are perfectly acceptable for a home-orientated laser printer.

Finally, as a photocopier, the results were again mediocre. The banding and striping problems remained, and outside black-on-white text, the copied image as a whole lacked the precision and clarity you'd expect from a laser printer.

The laser printer has long been the format of choice for business use, yet it has yet to make significant inroads into the home market. We suspect this will change over the next few years, with prices becoming very affordable (albeit still more expensive than inkjets), and features usually associated with home inkjet printers at last finding their way onto the lasers.

But we've yet to see the colour multifunction laser printer that could finally break the dam and flood the home market with laser models. The Samsung Multifunction Xpress C460FW makes a bold attempt, but for our money, falls short of this lofty goal.

The Samsung Multifunction Xpress C460FW has a very good range of connectivity options, with mobile printing, wireless direct and Google Cloud Print all catered for. It's one of the first models to offer NFC connectivity too. Print quality is, as you'd expect, extremely good. That's what lasers were built for after all. Its footprint is agreeably small too, so it won't dominate your desk like some laser printers.

The Samsung Multifunction Xpress C460FW isn't the quickest laser in the land, but we reckon its speeds are acceptable for the home market. Far more problematic is its image printing, which is better than some low-cost lasers, but nowhere near good enough to tempt home users to abandon their inkjets. The image printing here is good enough for low-needs small offices and home offices, but don't expect lab quality - or even halfway acceptable - photo printing. Paper handling is a mixed bag too, with no second input for notepaper and no auto Duplex.

If you're after a high-quality text printer that can do the odd image too, the Samsung Multifunction Xpress C460FW won't disappoint, but its photo printing lets it down. There's a lot to like about this low-cost all-in-one laser printer, but we don't think it will be the model to crack the home market.