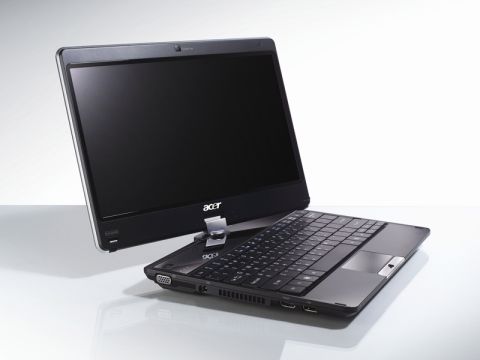 Does the Acer Aspire 1825 offer the best of tablets and notebooks?

2010 is already proving to be the year of the tablet PC, with Apple's iPad leading the charge.

As well as a host of upcoming competitors, such as the Fusion Garage JooJoo and the Dell Streak, we've seen a growing number of laptops which convert into tablets hitting the high street.

The Acer Aspire 1825PTZ-413G25n is the latest such convertible, and while the bright and responsive touchscreen adds a fresh layer of usability, this hybrid is unlikely to tempt any iPad fans to convert.

With the screen in a normal upright position, the Acer Aspire 1825PTZ is a typical compact laptop.

A well-sized keyboard stretches the width of the chassis and proves to be intuitive for touch typing, despite Acer's traditional flat key design, which lacks definition.

We made minimal mistakes even when typing at length, although there is visible flex in the centre of the board and the arrow keys are rather small and cramped.

With a weight of just 1.7kg and a thickness of 35mm, this is an ultraportable laptop that can easily be slipped into a bag.

The chassis itself is firm in all areas, which gives the Acer Aspire 1825PTZ a semi-rugged feel. This laptop likely wouldn't survive a tumble from a desktop, but it can bounce around inside a rucksack all day with little complaint.

Despite the compact chassis, Acer has found room for three USB ports and also VGA and HDMI outputs.

However, unlike the similar Fujitsu LifeBook T4410 convertible laptop, there's no room for an optical drive. You'll therefore need to hook up an external drive via USB to watch DVDs or install applications from a disc.

The Acer Aspire 1825's 11.6-inch touchscreen has a sharp 1366 x 768-pixel resolution and is pleasingly bright thanks to the LED backlighting, which means working into the wee hours is easy on the eye.

A glossy Super-TFT screen has been used and the results are impressive, with colours popping from photographs. The only drawback is the increased reflectivity, which will have you squinting at the laptop's screen when outdoors or in a brightly-lit office.

The screen is attached via a single central hinge, which allows the display to be tilted all the way back to a horizontal position.

The Acer Aspire 1825 is, therefore, just as comfortable to use on your lap as it is on a desk, without giving you neck strain. To convert the laptop into a tablet, the entire screen can be rotated 180 degrees and folded back over the keyboard in one smooth and simple motion.

The keyboard and touchpad are both obscured in this mode, so the touchscreen is the only means of interaction.

While Apple's iPad can be comfortably held in one hand, leaving the other hand free to prod the screen, the Acer Aspire 1825 weighs almost 1kg more. Weights trainers will likely scoff, but we found this a real burden when operating one-handed and our biceps ached after just a few minutes.

This problem also impacts the other convertible laptops we've seen, such as the Fujitsu LifeBook T4410 which comes in at a mighty 2.2kg. The best method for use is to either support the entire device with your forearm, or simply lay the Acer Aspire 1825 flat on a surface.

Interaction with the touchscreen is done directly using your fingers – there's no stylus pen here.

Microsoft's Windows 7 operating system comes pre-installed, with full touch support built in, although the interface is sadly not as smooth to use as Apple's iOS on the iPad.

The iPad has large icons and excellent gesture control, perfect for poking and prodding, whereas Windows contains too many cluttered menus and tiny links that are sometimes difficult to select with a finger.

Still, the Acer Aspire 1825's touchscreen is highly responsive and sharp enough to make navigation that little bit more tolerable. Prodding the screen equates to a left mouse click, while holding your finger down acts as a right-click.

Acer has also included a shortcut button that simulates key combinations such as Ctrl+Alt+Del, while a built-in accelerometer automatically rotates the Windows desktop depending on which way you're holding the tablet.

When it comes to typing out emails or documents, a virtual keyboard can be dragged onto the Acer Aspire 1825's screen from the left side of the desktop.

This is the same Windows keyboard that can be found on other convertible laptops, and is vastly superior to the one found on Apple's iPad as a full range of numbers and symbols are immediately accessible.

However, it's still a laborious way to type anything longer than a paragraph, because the response is not quite instant and there's no tactile feedback. For longer typing sessions it's highly recommended that the actual keyboard be used.

The touchscreen control could easily be rejected as a gimmick – a shallow attempt to emulate the iPad – but Acer has attempted to justify it by including its own TouchPortal software with the Aspire 1825.

This is a media hub that gives you quick and easy access to your photos, video and music, all well presented within a touch-friendly interface. There's also a small number of applications and games, including a notepad for scrawling hasty reminders.

On-screen hotspots are generously large, so fat-fingered users are well catered for. Media libraries are scrolled through by flicking your finger left or right, and simply tapping your selection will play music and video, or display photographs.

Full touch controls are laid out on-screen, to pause or skip through your media.

Even opening the application is easy – just drag down the right corner of the desktop and TouchPortal slides onto the screen.

It's reminiscent of HP's TouchSmart software which came with the TouchSmart tm2-1010ea hybrid laptop, and at least gives a reason for using the touchscreen. However, TouchPortal is blown out of the water by the huge variety of touch-based applications available for the iPad.

We found that the laptop was roughly twice as powerful as a typical modern netbook, but less powerful than laptops powered by Intel's latest range of Core processors.

3D performance is provided by an integrated Intel graphics card, which lacks its own dedicated video memory and so leeches from the main system memory instead.

As a result, graphical performance is very basic. Watching video and simple photo editing is no problem, but more complex multimedia jobs such as video editing and gaming are beyond the Acer Aspire 1825.

In comparison, performance trails behind the Fujitsu LifeBook T4410 with its newer Core 2 Duo processor. If you want a convertible tablet laptop which can effortlessly multitask and run the latest software, the LifeBook is the one to choose.

A similar Pentium processor is used the HP TouchSmart tm2-1010ea, although the TouchSmart also has a dedicated ATI Mobility Radeon HD graphics card which is capable of running more intensive multimedia applications.

However, the low-powered processor and integrated graphics does have a profound impact on battery life, with the Acer Aspire 1825 capable of almost nine hours of productivity between charges.

This beats the majority of laptops, and even most netbooks currently on the market, making Acer's tablet transformer one of the most portable machines we've seen in a while.