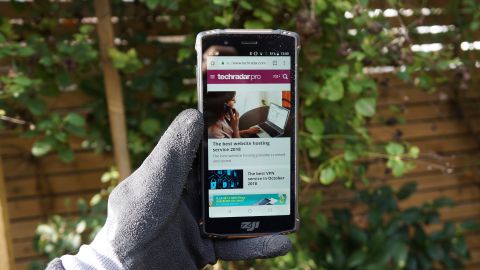 The Zoji Z9 has a big screen, big battery, and is built to last, but its weight makes the phone awkward to use, and with no wireless charging, or function button, there are better equipped rugged phones to choose from.

You may not have heard of Homtom yet, but the Chinese vendor has no less than 31 smartphones in its current line-up. Zoji is the sub-brand that takes care of Homtom’s rugged handsets, of which the Z9 is the latest.

Online Chinese retailer, Gearbest, sent us the sample and sells the Homtom Zoji Z9 for £219 (around $280) at the time of writing. Note that, while this price includes delivery, it is exclusive of any taxes that may be levied by HMRC or the courier companies on behalf of the vendor. Want to buy tech from online Chinese retailers? Read this first.

According to the badly translated website: “Zoji strives to change the impression on rugged phones like phone is brick-alike.” In other words, the manufacturer aims to make sleek and desirable IP68 smartphones, and the Z9 goes some way to achieving that.

That said, this oversized phablet still feels pretty ‘brick-alike’, but then it is packing a big battery and screen for a very reasonable price. The HD display measures 5.7-inches and the battery is rated at a decent 5.7Ah.

The main camera uses a pixel-popping 21MP sensor and there’s a heart rate monitor beside the fingerprint reader on the back. Combined with a fairly fast ARM processor and the latest edition of Android, this handset looks like being yet another budget rugged hit.

This is a large phablet and there’s no denying that the rugged casing adds to the bulk. The big slab of Gorilla Glass covering the 5.7-inch display is surrounded by an aluminum and polycarbonate chassis that acts as a bumper and should protect the screen from a fall of a few feet onto concrete. Homtom makes no rash claims about the phone’s drop resistance, mind you, but the casing is IP68 certified, which means it is impervious to water and dust.

Turn the phone over and its plastic rear is no less glossy. The powerful 21MP dual camera lens can be seen beside a fingerprint reader and a heart rate monitor. There are only two physical buttons on the side of the handset – a power button and volume rocker – and unusually, there are only two rubber-sealed ports.

One of the latter is for the SIM tray, which can hold two nano SIM cards and a microSD card, while the other opening hides a USB-C port. Through this versatile socket you can fast-charge the battery, transfer data quickly, and even plug in a pair of headphones using the bundled adapter if required.

Few would describe this as an attractive design, and furthermore it isn’t helped by the intrusive silver Zoji logo on the front and back, but at least it comes in a choice of orange and black trim finishes.

Here are the full specs of the Homtom Zoji Z9:

The budget rugged phone category is surprisingly vibrant with plenty of Chinese brands jostling for position. Homtom’s latest handset looks much like the rest and it has similar specifications and features too.

It’s built around a 2.5GHz ARM CPU with 6GB of RAM and 64GB of storage, which is enough to achieve respectable results in all of our benchmark tests. As mentioned, the phone is equipped with a USB-C port for fast-charging, a dual SIM tray with room for a microSD card, and a fingerprint reader.

Virtually all of the rugged phones we have seen include all these elements, and even though the Zoji Z9 is at the upper-end of the price range, the only feature it adds is a heart rate monitor which won’t be of interest to many outdoor professionals.

In fact, the Z9 is lacking a few key features, such as wireless charging or an external function button. PPT (press-to-talk) for walkie-talkie style comms would have been a good feature to include. The display is fairly large at 5.7-inches, but at 1440 x 720-pixels, the resolution is pretty low.

The dual lens camera has plenty of megapixels, which translates to lots of detail, but there’s no optical zoom and it would have been more useful to have a dedicated function button to open the camera app. Disappointingly, there are no specific hardware or software features to differentiate this rugged phone from a regular smartphone – other than the IP68 rating and large battery.

Here’s how the Homtom Zoji Z9 performed in our suite of benchmark tests:

Once you get used to the weight of this particularly heavy phablet, it handles just like any other Android device. The fingerprint reader didn’t work every time for us, but it unlocks quickly enough when you use a gesture, PIN or face unlock, anyway.

The Android interface is unmodified and the phone has enough grunt to run pretty much any app from the Play store. Only the more graphically challenging Android apps, like 3D games, caused the handset to run slower. These sort of efforts also highlight the fact that the screen resolution is only HD quality and not Full HD. Put this display next to any iPhone and the screen looks soft and lacking in depth.

Apart from the heavy reinforced casing and large battery, there’s nothing about this phone that tailors it to outdoor use. There are no shortcuts to the torch or camera apps and no outdoor toolbox app, for instance. It is awkward to use with gloves on and there’s no accommodation for a lanyard or belt clip.

In short, the Z9 is nothing more than a bog standard Android device in metal casing, which makes you wonder why you wouldn’t just buy a rugged case for your existing phone, and simply use that instead.

It’s hard to get excited about the Homtom Zoji Z9 when its only standout features are a tough IP68 shell, a heart rate monitor and a shiny logo. The device offers the minimum of features and specifications to keep it on a par with rival rugged options, but it looks a little expensive alongside aggressively priced competitors.

The Z9 brings nothing new to the category and doesn’t include any features that make it particularly useful for outdoor workers. Given the abundance of rugged phones clamoring for your attention, the Zoji Z9 is likely to sink without a trace.