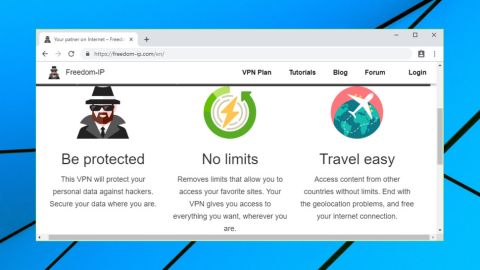 A poor service which fails at almost every level. If you've used two or more VPNs, we'd bet you have a better idea of what makes a good VPN than Freedom-IP.

The way a VPN provider's website is presented can tell you a lot about the quality of a service, and it didn't take us long to spot some fundamental problems with Freedom-IP.

Visiting the Freedom-IP blog, for instance, got us a browser error about an invalid certificate, because the blog.freedom-ip.com subdomain isn't covered by its freedom-ip.com certificate (that is, it's not a wildcard.) If a company can't get such a basic security detail right on its own website, and even notice there's a problem, why should you trust them to properly handle your own security?

The Tutorials page was almost as unimpressive, with a grand total of three setup guides covering how to set up OpenVPN on Windows, Mac OS X and Freebox OS. As two of these were dated 2015, it seems safe to say that Freedom-IP isn't very interested in providing any web-based assistance.

One of the reasons the company can get away with this lack of documentation is that it doesn't have any apps of its own. You must download and set up a third-party client, such as OpenVPN GUI, to use the service.

Unlike virtually all the competition, the Freedom-IP website doesn't list its locations, or even tell you how many there are. If you think that means they might be hiding something, you're right: there are only five (France, Netherlands, Poland, Russia, United Kingdom).

There are a few small pluses, too. OpenVPN support means you can set up the service on routers and other devices; there's support for connecting up to five devices simultaneously, and extras include a firewall and port forwarding support.

Prices start at €6 ($6.70) for the monthly plan, falling to €3 ($3.35) if you pay annually. That's cheaper than many, but still overpriced for what Freedom-IP offers, especially as top providers like CyberGhost and NordVPN can charge under $3 a month on their two- or three-year plans.

Freedom-IP does deserve some credit by giving you a three-day trial (you must hand over your payment details, but you're not billed until three days later.) The company spoiled the effect immediately as it only supports payments via cards, with no Bitcoin or even PayPal support, but having any trial period at all remains a plus.

Freedom-IP's privacy policy is one of the shortest we've seen at under 100 words. Inevitably that means there's not much detail, but the company still gives us some key information.

The good: as with other services, Freedom-IP states that it "does not record the content of communications".

The more questionable: the company does not perform deep packet inspection on your traffic "unless necessary for the operation of a user functionality (feature FamilyProtect)." That is, Freedom-IP has the capability to run in-depth analysis of what you're doing online, but it promises only to do this in very specific situations. Are you reassured by that? We're not.

The bad: there's some session and logging, including start and end times, the incoming and outgoing bandwidth used, and the ‘IP address of connection’, which presumably means the IP address you're allocated. This doesn't directly tell anyone what you're doing, but it's still creating a record which ties you to that VPN IP address at those times, which is more logging than you'll usually get elsewhere.

Browsing the terms of service revealed another interesting clause: "any customer who makes unreasonable demands on the service may be restricted." Use the service ‘too much’ and it sounds like your connection might be throttled.

Signing up for Freedom-IP was simple, and within a few moments we had access to the company's web dashboard. There's no help on getting started, unfortunately, not even a clear ‘go here’ indicator; instead you're left to figure it out for yourself.

We followed the Downloads link. A Windows link seemed to offer a copy of OpenVPN, so we grabbed that. Freedom-IP had customized this to include the config files for its own servers, which in theory is a good idea. In practice, it's not, because it seems Freedom-IP can't spare the time to keep the OpenVPN build up to date. As we write, the latest version of OpenVPN is 2.4.7; Freedom-IP's build is 2.3.13, more than two and a half years old.

Right-clicking OpenVPN's system tray icon did at least display a menu with all the Freedom-IP's servers, but there were a couple of unexpected problems.

The first is that, although Freedom-IP supports on five locations (France, Netherlands, Poland, Russia, United Kingdom), the download includes configuration files for 32. If you choose one of the unsupported locations, it's just redirected, so for instance connecting to 'Canada' gets you an IP address from France, and the USA server gets you IPs in Russia. The website doesn’t clearly point this out, so users will only begin to realize when they find they can't access geoblocked sites from these unsupported locations.

The second problem is that whichever location you choose, you're prompted to enter your username, each and every time. To fix this you must manually edit each configuration file, which isn't exactly convenient.

Turning to our website unblocking tests didn't improve the picture. With no US server, we couldn’t get into US Netflix or YouTube. And although there is a UK server, it didn't unblock BBC iPlayer.

For all the hassles and concerns, Freedom-IP was capable of decent performance, with most servers averaging 45-55Mpbs.

And the good news continued up to our final privacy tests, where the service shielded our IP and kept us safe from DNS and WebRTC leaks.

Freedom-IP's speeds aren't bad, but the VPN fails in almost every other area: tiny network, no clients, minimal support, a near useless website, and the list goes on. The service feels like a personal project run in someone's spare time, but they're bored with it and have lost interest. Avoid.