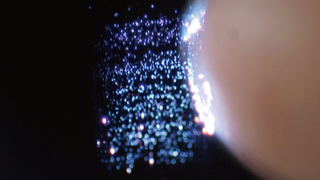 Japanese researchers studying incredibly fast lasers have developed a method for creating holograms you can touch, paving the way for floating interfaces.

While most 'holograms' you see at concerts and the like are merely back-projections, real holograms have been shown off before. They take advantage of the way high-power lasers ionise the gases in the air, creating small balls of plasma that emit light.

These points of light are incredibly hot, so you can't touch them, but now the Digital Nature Group has fixed that problem. They used incredibly fast laser bursts - so fast that the plasma isn't around long enough to do any harm, but its light is still emitted.

You're My Only Hope

For demonstrative purposes, the lab showed off holograms of a heart, a star and a small fairy. The researchers also showed off a checkbox that can be ticked by tapping it - a vision of the login screens of a future holographic internet, perhaps.

You're probably dreaming about holodecks already, but the technology is quite some way off that still - something more like R2D2 beaming an image of Princess Leia, though? We're almost there.

The team will be showing off its invention at the Siggraph 2015 conference in Los Angeles in August.