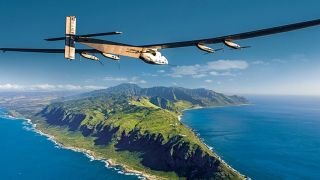 The world record for longest solo flight without refuelling has just been beaten by André Borschberg, who's currently piloting the solar-powered Solar Impulse 2 aircraft on a 13-stage round-the-world trip.

Borschberg broke the record at 76 hours into his journey, beating Steve Fossett who set the 76-hour record on the Virgin Atlantic Global Flyer in 2006. He also broke all distance and duration records for solar aviation.

Borschberg is currently on the eighth stage of the journey, travelling from Japan to Hawaii. The original aim was to achieve the global voyage in 12 steps, but bad weather forced the Solar Impulse 2 to make the extra stop in Japan.

The plane will eventually touch down in Abu Dhabi, where its journey began.