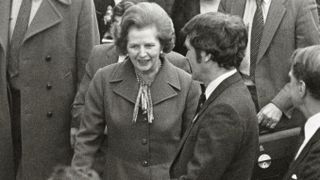 As you sit on the phone to your ISP's customer service line, listening to half-baked excuses for why you've only got 0.5Mbps upload speed and why you "need" to upgrade to "superfast" fibre optic, it may be little comfort to know that in an alternate reality you'd already have it as standard.

In 1990, a single decision by then-Prime Minister Margaret Thatcher had a devastating effect on the UK's broadband infrastructure for the next 20 years and for the foreseeable future.

In a little known story about the UK's broadband history, Dr Peter Cochrane, former Chief Technology Officer at BT and all round tech guru, tells TechRadar how the UK lost the broadband race way back in the 90s.

The story actually begins in the 70s when Dr Cochrane was working as BT's Chief Technology Officer, a position he'd climbed up to from engineer some years earlier.

Dr Cochrane knew that Britain's tired copper network was insufficient: "In 1974 it was patently obvious that copper wire was unsuitable for digital communication in any form, and it could not afford the capacity we needed for the future."

He was asked to do a report on the UK's future of digital communication and what was needed to move forward.

"In 1979 I presented my results," he tells us, "and the conclusion was to forget about copper and get into fibre. So BT started a massive effort - that spanned in six years - involving thousands of people to both digitise the network and to put fibre everywhere. The country had more fibre per capita than any other nation.

"In 1986, I managed to get fibre to the home cheaper than copper and we started a programme where we built factories for manufacturing the system. By 1990, we had two factories, one in Ipswich and one in Birmingham, where were manufacturing components for systems to roll out to the local loop".

At that time, the UK, Japan and the United States were leading the way in fibre optic technology and roll-out. Indeed, the first wide area fibre optic network was set up in Hastings, UK. But, in 1990, then Prime Minister, Margaret Thatcher, decided that BT's rapid and extensive rollout of fibre optic broadband was anti-competitive and held a monopoly on a technology and service that no other telecom company could do.

"Unfortunately, the Thatcher government decided that it wanted the American cable companies providing the same service to increase competition. So the decision was made to close down the local loop roll out and in 1991 that roll out was stopped. The two factories that BT had built to build fibre related components were sold to Fujitsu and HP, the assets were stripped and the expertise was shipped out to South East Asia.

"Our colleagues in Korea and Japan, who were working with quite closely at the time, stood back and looked at what happened to us in amazement. What was pivotal was that they carried on with their respective fibre rollouts. And, well, the rest is history as they say.

"What is quite astonishing is that a very similar thing happened in the United States. The US, UK and Japan were leading the world. In the US, a judge was appointed by Congress to break up AT&T. And so AT&T became things like BellSouth and at that point, political decisions were made that crippled the roll out of optical fibre across the rest of the western world, because the rest of the countries just followed like sheep.

"This created a very stop-start roll-out which doesn't work with fibre optic - it needs to be done en masse. You needed economy of scale. You could not roll out fibre to the home for 1% of Europe and make it economic, you had to go whole hog.

"It's like everything else in the electronics world, if you make one laptop, it costs billions; if you make billions of laptops it costs a few quid".