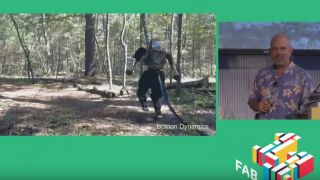 Boston Dynamics, the robotics company acquired by Google in 2013, recently took one of its humanoid robots walkies - the results of which were shown off during a recent Fab Lab conference.

Although it's attached to a power tether, the robot is pretty free to roam around. While it struggles more with uneven ground, it manages to navigate through without falling over, though there are a few close calls.

The robot's movements are eerily human, but Boston Dynamics still has a lot of work to do. Company founder Marc Raibert says that the company is working on a version of the robot which doesn't have a tether.

"We're making pretty good progress so it has mobility that's in shooting range of yours," he said.