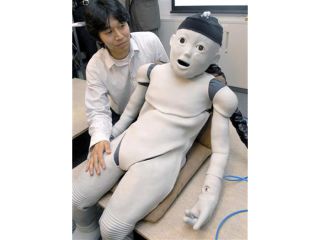 If this doesn't creep you out, then probably nothing will. Researchers in Japan have created a soft robot that acts like a giant baby in the name of better understanding how we all develop as children.

CB2, as the robot is known, is part of research by a team from the Graduate School of Engineering at Osaka University . It's programmed to act as an infant between one and two years old. It does this by rolling around and showing interest in its surroundings, although at 130cm tall and 33kg in weight the proportions are a little off.

Nonetheless, the technology in CB2 is impressive. It has cameras for eyes, microphones for listening, joints operated by compressed air and almost 200 sensors embedded in its flexible silicone skin.

As seen in the videos here , CB2 gives a passable impression of a large, clumsy, grey child fumbling its way around a room. But the scientists hope for better things in future. The idea behind the work is to develop a robot that can learn so that the team can teach it to walk and even talk while they study its cognitive development.