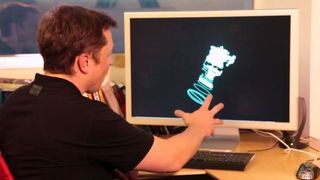 Elon Musk promised us on Twitter last week a video demo of hand manipulated holograms, and he made good on his word.

But the demo was a bit underwhelming. As to be expected with all the hype around Musk's Tweet, the world was expecting the high tech Tony Stark interface, whereas reality didn't exactly live up.

Rather, the rocket "design" looked like a Kinect game of "let's move rocket parts around."

Regardless, with the help of the Oculus Rift and Leap Motion (as mentioned by Musk), it's still a step towards that sci-fi fantasy of real holographic tech, and enough to keep us happy.

Our blips are still awesome without holograms.