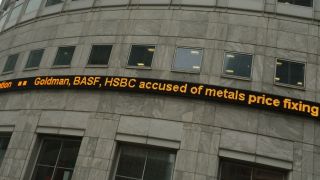 The public furore over dodgy bankers may have subsided a little, but since the 2008 financial crisis we have seen 2013's rigging of Libor and the recent fixing of the foreign exchanges market.

Fines and compensation payments (read: PPI) have cost British banks £38.5 billion (around $60 billion, AU$73 billion) this century, and some think it's the banking culture that's to blame. However, there could be a way to change this bad behaviour, and TechRadar Pro was given a demo of this tech. It's a new speech recognition and analytics engine that records and scrutinises every single sentence – plus emails, chat rooms, IM and texts – to identify fraud as it's happening. This fix could be history.

Why do we need speech analytics?

Although banks need to limit their risk to fines and compensation, the new market for speech analytics is opening because of the Dodds-Frank Act in the US, which was created after the collapse of the Lehman Brothers bank in 2008.

It puts an onus on investment banks, in particular, to be able to reconstruct derivative and swap trades within just 24-72 hours. "The Act actually says the data should be 'readily available', which could be as short a time as 14 hours," says Juan Manual 'Juanmo' Soto, an industrial engineer and CEO of Spanish linguistics company Fonetic who specialises in speech analytics. "Every big bank in the world is affected."

His solution is the Fonetic Linguistics Voice Platform, which uses a unique algorithm that records and analyses speech. "It's about managing risk for banks," says Karen Winter, Sales & Marketing Director (EMEA) at Fonetic, who began her career in the banking sector working for Morgan Stanley, and later worked as a foreign exchange trader for ABN AMRO Bank. "The nature of trading is to push the boundaries, and sometimes bankers go over them."

"We use the Nuance speech recognition engine, and Genesys SpeechMinor as the platform for handling the administration of the calls," says Juanmo, though the crucial speech analysis algorithm is unique to Fonetic.

The Linguistics Voice Platform does two things. Firstly, it allows a trade to be reconstructed. "The trade isn't closed so there is no reference number," says Winter about the detective work involved in tracking the history of a fraudulent trade. "You have to use metadata like the date and the content of the conversation to detect what the underlying asset is, and who was involved."

The second use of the tech is in Trading Communications Surveillance, the monitoring in real-time of voice and, crucially, text sources also – including emails, chat rooms, and other written documents on a corporate network – for fraud and bad practices. Anything that the bank wants to detect, it can generate alerts for in near real-time or compile a list of suspicious conversations for auditors to look at later.

Can it understand different languages?

Yes – and speaking Klingon doesn't fool it since the software immediately flags up anything unusual. Nuance's speech recognition engine can handle 84 different languages, and many variations within them, and the Linguistics Voice Platform software can listen out for all of them.

"It's working in five languages for some banks," says Juanmo. "The Nuance engine even includes variations – it can understand US English, Australian English, UK English and even Singapore and South African English, with four or five versions of Spanish also," he adds.