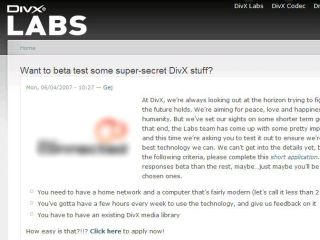 The DivX Labs website is appealing for Beta testers now

DivX is to enter the media streaming market in earnest and is appealing for beta testers for its early application. The move is connected to the GejBox Media Streamer prototype that appeared on gadget blogs earlier this month.

It's a HDMI-sporting Ethernet/Wi-Fi media streamer that has a plug-in for streaming from DivX's Stage 6 YouTube-esque online video repository. Reports suggest it also has an Apple TV-style connection to YouTube itself.

However, DivX's strength isn't in the hardware business. It'll more likely seek to maintain partnerships with companies like Linksys and others who already use DivX tech in their boxes.

The DivX Labs website is appealing for Beta testers now . DailyTech suggests that beta testers have found that the interface for the test software supports practically every video format. These include XviD as well as audio and images too. No Apple FairPlay support is reported, but nobody will be surprised at that.

The GejBox is named after famous DivX hacker Jerome Rota.