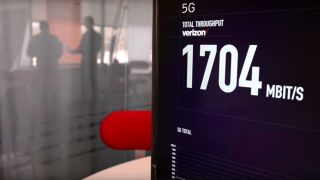 Update: Samsung has confirmed this upcoming handset will have the newly announced Qualcomm Snapdragon 855 chipset running inside.

Samsung and Verizon have confirmed plans to make one of the world’s first 5G smartphones available to customers in the first half of next year.

Verizon launched the world’s first commercial 5G network in October, offering ‘5G Home’ Fixed Wireless Access (FWA) broadband in a number of major US cities, and is gearing up for the launch of its mobile broadband service in early 2019.

Verizon has worked closely with Samsung on its 5G rollout, making use of the Korean manufacturer’s networking equipment in its deployment and device testing. Last month, Verizon claimed a “world first” when it completed data transmission to a smartphone on a commercial, standards-based 5G network using a Motorola Device and Samsung’s 5G New Radio (NR) kit.

The two companies have revealed little about what from the device will take, other than that it will show off a proof-of-concept at this week’s Qualcomm Snapdragon Technology Summit, powered by Qualcomm’s Snapdragon technology, including the X50 5G NR modem and other radio components.

“5G will usher in a new era of mobile connectivity, allowing people to connect to data, experiences and other people in ways never thought possible,” said Verizon’s Brian Higgins.

“Together, Samsung and Verizon have made huge gains in bringing 5G commercial services to consumers in several cities. Now, we’re partnering to create a smartphone to put the power of 5G in the palm of your hand.”

US rival Sprint has teamed up with LG to release a 5G smartphone in the first few months of 2019 ad well, although it is unclear which device will hit the shelves first.