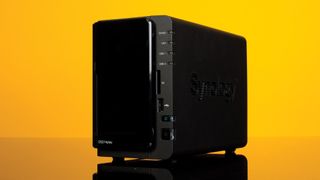 Take a look at our picks for the best NAS drives for your needs. (Image credit: Future)

It might seem hard shopping for the best NAS drives. However, it’s much easier than it seems. And to help, we’ve compiled this list of best NAS drives for you to purchase.

Before diving right into the list, maybe we should go over what exactly a NAS device is, and what to look for in the best NAS drives. NAS stands for network attached storage and is essential for those using a network instead of a single computer. Think of a NAS device as an external hard drive for your entire network.

Since NAS drives are plugged into your network, data stored there is accessible from any device on the network. The best NAS drives often take it one step further and allow remote access, great for digital nomads and anyone wanting to work from home for the day. Also, the best NAS drives are platform-agnostic so it doesn’t matter what OS is on your device. You’ll still be able to gain access with whatever you have on hand.

Bear in mind a few things when shopping for the best NAS drives for your needs. How much storage do you need? While most of the devices we’ve rounded up come with a good deal of storage, you’ll want to look ahead at how much you’ll actually need, not just now but in a year. The best NAS drives should be able to do more than just provide a large hard drive for your network. They should also be able to store your backups in case anything happens to your original files.

As you’ll notice, not all of the best NAS devices use hard drives. Instead, they hold multiple hard drives that you have to buy separately. While a tad more complicated, you gain flexibility in storage space and hard drive speed. Also, if you do some bargain hunting, you could save some cash buying the hard drives separately.

You’ll want to consider your backup and redundancy needs when searching for the best NAS drives. Many are able to hold more than one hard drive and can mirror that hard drive in case of failure. So if one hard drive does go, you don’t have to worry. It’s all backed up on another. Also, the best NAS drives allow you to use an external drive as a backup. Whether this is an extra precaution or because you want to take the data with you, it’s a useful feature.

Best NAS devices - at a glance

WD has attained quite significant success with its unashamedly consumer-friendly My Cloud products, which can stream to any DLNA-compliant device and be accessed via mobile apps for iOS and Android.

Advertised as a 'personal cloud,' this WD is one of the best NAS drives by any other name and starts at 2TB of storage (you can also get it in 3 or 4TB). Because it's a one-bay unit, it can't back itself up since there's only one drive. However, it can back up to an external hard drive thanks to a USB port on the back.

Continuing with the 'personal cloud' theme, this unit from Seagate takes its lead from My Cloud, while offering far larger capacities, along with dual bays for two hard drives. This allows the Seagate Personal Cloud 2-Bay NAS device to mirror the files from one hard drive to a second one, securing your files in case one of those drives fails.

We also appreciate the no-fuss appearance of this unit, meaning it fits easily under a router or on a shelf. Plus, it can work with cloud accounts – like Dropbox and Google Drive – and you can also use an app to share content to streamers, such as Chromecast and Roku.

The QNAP TS-251A is an extraordinary NAS device that has more features than you can shake a stick – or the included remote control – at. It includes dual Ethernet ports, an HDMI out for connecting it to a TV and respectable hardware like the dual-core 1.6GHz Intel Celeron CPU and 4GB of RAM for hardware transcoding media files.

The QTS OS also lets you effortlessly install a variety of apps, from the Plex Media Server and file sharing apps to, surprisingly, a karaoke app, as well as running Ubuntu Linux for added flexibility.

Long story, short: this is an incredible NAS device, even if you do have to purchase the hard drives separately. Just factor that in to the overall cost.

As one of the best NAS drives out there, this 2TB dual-bay unit (also available in 4, 6, and 8TB capacities) comes courtesy of Buffalo, the company that also produces the TeraStation line of advanced NAS units.

The key selling point of this model is that it can integrate directly with BitTorrent, which means that it can download files for you even when your PC is not on. You won’t need to worry as much about your downloads getting interrupted. Like many of the other devices listed, you can also stream to it via various devices, it's platform agnostic, and you can use it as an iTunes server.

A beginner NAS with room for expansion

Every now and then, a product comes along that challenges the conventions of their product category. The DS1817 is one such product. Most NAS devices that occupy the ‘value’ space tend to be underpowered and have little to no room for expansion. The DS1817 breaks the norms by letting users fill the included eight drive bays with whatever they desire, so that you can get as much (or as little) storage as you want. On top of this massive expandability, which helps rank it as one of the best NAS drives available, the 10GbE LAN and Quad-Core CPU also mean that you’ll never be left wanting for performance.

A unit that backs itself up

This two-bay unit can produce a mirrored backup of your data, duplicating your files on both drives, using RAID configuration. That's quite an advanced feature for a consumer unit. Just keep in mind that you end up paying quite a lot for that capability and WD's user-friendly presentation, including an easy-to-master, browser-based control screen.

This is a 4TB unit, though 6, 8 and 16TB units are also available. For extra peace of mind, you can also back up the contents to Dropbox.

Expensive, but packs a punch

Anyone looking at purely technical spec’s will instantly fall in love with the Synology DiskStation DS1517. Thanks to its quad-core CPU and up to 8GB of RAM, this NAS can reach sequential speeds of 111.4 MB/s write and 110.3 MB/s read without any trouble. Combining that raw performance with the DS1517’s expandability, and you have a formula for a NAS device that has undeniably earned its spot among the best NAS drives on the market. Just know that the DS1517 isn’t cheap, and unless you’re a creative professional, or you’re looking for a NAS for a small business, it might be a bit too much.

Featuring RAID capabilities found in pricier and more intricate NAS devices, as well as offering Microsoft Active Directory support, this box is designed for small business use. That’s without mentioning that it can also act as a file server, FTP server, backup server and P2P download server.

In addition, WD's EX series is available in diskless variants, though this price is for the 4TB version. 8TB, 12TB and 16TB units are also available to purchase. If you don't need any of this extra stuff, then go with the My Cloud Mirror.

Excellent backup for a wide variety of users.

If you're looking for one of the best NAS drives to help manage your backup needs, the DL4100 might be worth a look. One of the coolest features of this device is its web dashboard, which provides users options for backing up to cloud services such as Dropbox and Box. Additionally, it has the ability to set up SMS and email alerts in case the system fails for whatever reason.

As far as storage options go, the DL4100 is equipped with four drive bays and comes with your choice of four configurations. Despite some annoying issues with wireless transfers, we found that the DL4100's 1.7GHz dual-core Atom processor and 2GB of RAM (configurable up to 6GB) performs admirably. Combine this with a simple setup and cloud connected web apps, and you have an interesting backup device on your hands.