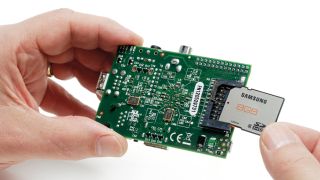 More treats from the Pi people

We don't want a lot for Christmas, there is just one thing we need - a Raspberry Pi app store and by jove, Santa's delivered early.

Yes, the Raspberry Pi Foundation has released its Raspberry Pi Store today, offering a one-stop-shop for users to share their homespun Pi software.

The store forms part of the Raspbian OS, and will feature both free and paid-for software including games, apps, tutorials and developer tools.

Pay as you go

Like Vimeo, the Raspberry Pi Store will offer a 'tip jar' scheme whereby users can pay what they think software is worth (or not pay at all if they're a bit miserly).

Those developers whose faith in human generosity is a bit shaken can sell their games and apps outright with a secure payments system.

It's all part of the Foundation's long-term game plan, says Eben Upton of the Raspberry Pi Foundation: "Our driving aim has always been to use Raspberry Pi to encourage and introduce a generation of children to programming and creative computer science.

"By now enabling Raspberry Pi users of all ages to gain critical and commercial success from their work through the new Pi Store we also believe it will be a powerful incentive for others to get involved and further spread the word."