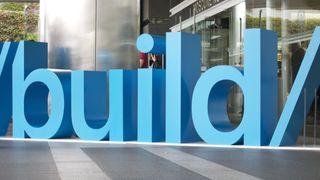 Build it, and they will come

Like a game of Jenga, Build 2013 was over before we knew it (our Jenga games typically end in a crash of tiles quite early).

The conference was a subdued affair, with developers, some subversively donning Google Glass, quietly shuffling from session to session, learning about Windows 8.1, Kinect, Azure, Visual Studio and all the tricks and tools Redmond could offer.

With no new hardware announced and most of the goods spilled before Build kicked off June 26, there weren't many surprises during the three-day affair. The company instead offered a deep dive into its coding architecture and flushed out its update for Windows 8, encouraging everyone to download the 8.1 Preview A.S.A.P.

Above all, there was a conciliatory air to the event, one that saw company brass admit they haven't done a good job with certain dev messaging, hammering on the common cores between platforms, earnestly trying to explain why creating apps for Windows and Windows Phone isn't a Herculean feat, and gifting the crowd with goodies like the Surface Pro and Acer Iconia W3.

How well received Microsoft's messages were we'll know in due time, but until then here's a rundown of our top 5 moments from this edition of Build.

The reveal of Windows 8.1 may have lacked a little luster thanks to the company's decision to talk about it extensively before Build began, but that didn't stop most people from being relieved to see the return of the Start button, among other changes.

With Windows 8.1 we have some interface alterations like new smart search and multiple modern app views as well as improvements like built-in SkyDrive sync. The UI changes may be off putting to some, at least to start, but everyone should enjoy overall improved performance.

It may not be the seismic shift we saw from Windows 7 to Windows 8, but the updates Windows 8.1 brings are sensible and welcome.

2. All together now - 'rapid release cycle'

Despite the ascendance of Google and Apple, Microsoft is still a giant technology firm.

Unlike its counterparts however, Microsoft has suffered from a lack of adaptability. But during Build, CEO Steve Ballmer let everyone in on a secret: the company plans on bumping its release cycles in order to transition from just a software company to a hardware maker that's still, appropriately enough, "driven by software."

What does this mean for us? Well, for starters Microsoft's historical 3-year OS releases are out the window, a relief to the non-business customers among us.

But Ballmer's thrice-repeated "rapid release cycle" mantra isn't just for software. Microsoft is in the midst of moving beyond software into a device and service company, so look for more tablets, phones, PCs and other products announced more frequently from Build forward.

Specifically on tablets, Ballmer said there will be a proliferation of smaller Windows tablets throughout the year, and we heartened to hear we'll have other small choices to choose from than the Iconia W3.

Many attendees we spoke with said they noticed Microsoft taking on a different tone the one it's affected before, and the messaging of faster releases and various product offerings was certainly part of the perceived shift going on at the company.

How well Microsoft can stick to its word we'll see, but we left with the impression that we're in for different Microsoft than we knew a year ago.

Windows 8 and Windows Phone 8 have for eight months suffered a dearth of apps, but Microsoft not only added to its application offerings during Build, it managed to lend a little "we're announcing today" buzz to the proceedings.

Facebook, Flipboard, Songza, OpenTable and Rhapsody apps were all revealed, while Chief Evangelist Steven Guggenheimer showed off a preview version of a Foursquare tablet app, the first of its kind from the check-in company. We may even have an offering from Yelp before long, too.

Microsoft also managed to pack in the cleaner look coming with the Windows 8.1 Store, adding auto-updating in the process.

Yes, there's still nothing from Instagram, but app by app Microsoft is ramping up its offerings and even anticipates topping 100,000 in the Windows Store soon. Popular choices are finally arriving, and Build helped the company show it's taking its application situation seriously.

4. Turning Internet Explorer up to 11

Though we're borrowing from the title of a press session devoted to Internet Explorer, Microsoft went to considerable lengths to demo why it thinks IE11 (available as a preview in Windows 8.1) is "more than just a browser."

We'll need more time to determine if it's done that exactly, but what we saw from IE11 was enough to stay interested. The main takeaways are that the browser has been optimized to the max for touch, and in such a way that there's less strain on a machine's CPU and battery life.

There's added 2D and 3D graphics support thanks to the addition of WebGL, and IE11 also shores up Google's SPDY protocol. This should mean faster website download speed in IE, an addition that's hard to fault.

Will we see Internet Explorer 11 on Xbox, Windows Phone and Windows 7? Dean Hachamovitch, corporate vice president at IE, wouldn't give a definitive answer, but the "winking" impression he gave was that it's an affirmative for all three.

5. A little clarity on Xbox One development

Just how developers can develop for Xbox One is still a mystery, yet the company teased on Day 2 of Build that Windows 8 is a good place to start.

Though the next-gen console is a curated platform, it still houses a kernel of Windows 8, and Guggenheimer hinted that those looking to get a jump on Xbox One apps can lean on OS.

"Well if you want to know how to sort of get a head start in thinking about developing for Xbox One, the logical thing to do is to go to develop Windows 8 applications," the exec said.

Guggenheimer's comments provide an ample clue as to what Microsoft is thinking, and that common core could prove pretty hands for devs and gamers alike down the road.

We asked some Microsoft developers employed by the company to provide a definitive answer as to whether Windows 8 apps will be able to make the jump to the console, but were told that they themselves don't yet know.

While we'd like to have all the answers on the Xbox One tied up in a nice bow, it seems for now that on the development end, all we can say is that the signs point to Windows 8.