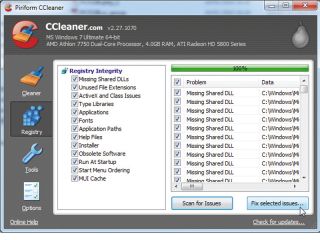 CCleaner is just one of many registry cleaning tools - but do they work?

A rolling stone gathers no moss, or so the saying goes. It must be going down a really big hill, or a mountain. Or just be rolling on some kind of rock treadmill. I am actually going somewhere with this: your PC is like a stone that gathers moss. Horrible digital moss that stops your PC rolling.

Each time you add a new game, or delete a file, your PC gets clogged with irrelevant and orphaned files. And then there's the registry, from which Windows loads up all manner of driver links and other gubbins. But many of the entries in the Registry aren't used by Windows, and loading them up slows down your PC.

Registry cleaners are said to remove irrelevant entries, and thus speed up the boot process. Not everyone thinks Registry cleaners are a good idea. We can say without hesitation that Luis hates them. They can potentially do more harm than good: shaving a couple of seconds off your boot-up time and freeing a couple of kilobytes of RAM is worthless if your PC is going to crash every 12 seconds.

Registry cleaners also tend to come with an awful lot of extra features to 'boost' your system, including spyware removal tools, antivirus programs and internet speed optimisers. They promise to make your PC as good as new, and this must be pretty appealing to stupid people. It's like painting a 1986 Ford Escort a different colour in the belief that it'll make it faster.

They can make a difference

Of course, it's not all bad: if you uninstall a program incorrectly, it can leave Registry entries which could cause your PC to get confused and crash. If you're regularly installing and uninstalling stuff, it might be worth using a cleaner, but we'd recommend that you create a restore point first.

Do they work? Not dramatically, but through our tests we found that they could make a difference to boot-up times, but – bizarrely – some of them made it worse.

System optimisers and Registry editors aren't as essential as people make them out to be, ranking way below antivirus and firewall software. We've plucked six cleaners from the Registry tree and put them through their paces.

After running each one, we timed the boot process until Steam started, and then we ran Mass Effect 2 to see how memory performance and general speediness had been affected. The apps vary from completely free simple programs to paid-for software that promises to transform your PC into an uber-rig. The key word here is promises: a lot failed to do what they said on the tin.

Ccleaner has become ubiquitous as a free alternative to the paid-for system optimisers, and it's not hard to see why: it's a small, free download that promises to wipe all the crap out of your computer.

Not only does it fully scrub up your registry, it will also go through your whole PC and remove temporary internet files, cookies and unused documents. Perfect if you want to cover your dodgy online tracks.

In terms of results, Ccleaner didn't deliver much of an improvement. It shaved 20 seconds off our boot time, but other products in our test resulted in better performance. It's a shame because Ccleaner didn't use the cloak-and-dagger approach to optimisation, and showed us exactly what it was doing, and what was wrong.

Great if you're paranoid about your internet use (you dirty, dirty boy), not great if want to fix your Registry. It will also scour your system for useless files and empty your recycle bin, which is great for freeing up precious hard drive space. And it's free.

According to All in One System Suite's packaging, it includes 60 plus powerful tools to keep your PC safe and healthy.

Unfortunately, these powerful tools aren't packaged in any logical or understandable way. A 'One-Click Optimise' actually involved two clicks, it insisted on updating itself every time we started it, and it looks horrific.

Results were great though: it boosted our start-up time by almost a minute. But then it insisted on starting a load of services, and asking us if we'd changed our hard disk drives recently. We hadn't.

By the time it had finished asking us questions, our boot up time was about four minutes, which is ridiculous by anyone's standards.