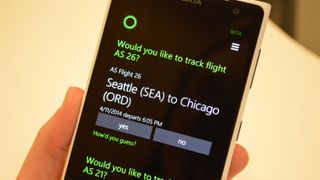 It's playtime for the devs

Windows Phone 8.1 isn't expected to arrive in full until later this year, but Microsoft is pushing out an early version for developers that can be downloaded right now.

If you're not a dev but just can't wait to get your hands on the Windows Phone 8.1, you can quite easily set up a developer account and download the update now - although we wouldn't advise it.

Chances are there will be a few bugs in the software, and Microsoft says you won't be able to revert to a previous version if 8.1 doesn't play nicely with your phone.

8.1 is a bigger update than its incremental name suggests, introducing Microsoft's virtual assistant Cortana (if you're in the US) and a new notification centre, among other things.