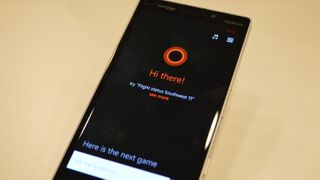 Get to know your future robot overlords with the help of Windows Phone 8.1

If you're using a Lumia handset that runs Windows Phone 8 then you could soon be enjoying all the new Windows Phone 8.1 features, as Nokia has confirmed that it will be coming to all such devices as an over-the-air update, starting this summer.

Microsoft tells us that the Windows Phone 8.1 will be rolling out to current WP8 users in the coming months. We don't have a more specific date than that for the start of the roll out.

Unfortunately, the new Cortana voice assistant which looks set to give Siri and Google Now a run for their money will not hit the UK until late 2014, but it will roll-out in beta in the US this summer.

It's not quite Windows Phone 9, but it's a worthy update all the same.