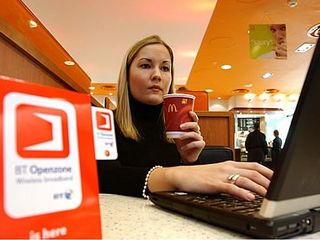 McDonald's is to become the biggest purveyor of free Wi-Fi in the land. It has decided to offer free Wi-Fi in each of its 1,200 UK fast-food joints. The company previously had several hundred BT openzone hotspots in stores, but it will now pay for them itself. It has also partnered with hotspot provider The Cloud over the scheme.

"The launch of free Wi-Fi in our restaurants in the UK is an exciting move that we believe will further enhance our customers' experience when they visit us," said head of McDonald's Restaurants Ltd, Steve Easterbrook.

"What's more, we hope that this will be a breath of fresh air and give greater choice for Wi-Fi hotspot users who have had little choice but to pay by the month or hour to access the internet on the move."

He's hit the nail on the head there. The move will shake up the expensive paid-for hotspot industry and may even have an impact on Starbucks' T-Mobile paid-for hotspot scheme as McDonald's continues to offer cheap-as-chips (well, fries) coffee deals.

The Cloud's Owen Geddes called the move "a visionary stance". The impact could be very interesting indeed.