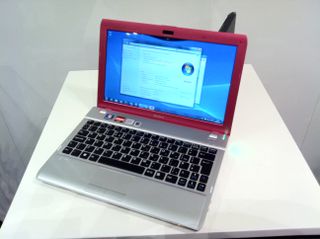 Decked out here in a rather lurid pink, here's our hands on: Sony VAIO Y Series review.

The new model replaces last year's Y Series with a major change, moving on from the low voltage Intel Pentium processor and replacing it with one of AMD's newish E-Series Fusion chips.

You can check out our video hands on of the Sony Vaio Y series below:

That brings both graphics and processing on the same chip - something AMD calls an APU. It also means HD video playback won't be a problem through the HDMI port.

The model we looked at here packed the E-350 clocked at 2.6GHz, alongside a decent 4GB blob of memory. That should mean that the performance and graphics concerns of the last generation are eradicated.

AMD's confused branding is out in force on the Y Series - Fusion is still being marketed under the AMD Vision brand, but because decent graphics are on board yet another sticker is required.

The AMD platform is designed to be low cost and Sony told TechRadar it would be pitching this model at those who want both portability and reasonable power but who don't want to pay for a high-end power portable.

This type of machine is going to be increasingly where previous netbook purchasers are going to be looking. As Ruth Storey, the category marketing manager for Vaio in the UK said in the presenation of the new models, "the netbook market is declining at an alarming rate".

Quite how much the Y Series will cost remains to be seen though we'd expect it to slot in where the old model left off at around £600.

Portability is the Y Series' middle name and it clocks in at just 1.5Kg - a fine achievement for something that seems so capable.

As you'd expect from Sony, build quality is excellent, while the keyboard and trackpad are also to be praised - indeed, we preferred it to the keyboard on the VAIO Z Series we looked at yesterday.

Sony also cites a six-hour battery life for the Y Series, broadly in line with other estimates for the AMD E-Series platform.

The Sony VAIO Y Series UK release date is July 2011 and it'll be available from Sony direct as well as Currys and PC World.