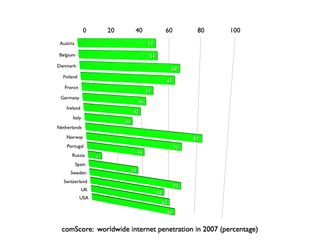 The Netherlands is the most internet-connected country in the ComScore survey. Russia is last

UK web surfers are among the most active Europe with 21.8 million visitors per day. We also have the highest usage days per month (21 days per user) and clock up the most hours (34.4 hours per month).

However we fall further down the surfing league table when it comes to the percentage of the population who have online access. Here we're beaten comprehensively by the Dutch and Scandinavians who rack up 68 per cent and 83 per cent respectively. The UK manages just 65 per cent. Germany also has the largest online population with 32.6 million people age 15 or over online, compared to the UK's 31.2 million.

The figures come from the ComScore World Metrix which reveals on an average day in April, 122 million Europeans were online, compared to only 114 million US citizens. Europeans also spend an average of 16.5 hours days each month online, or a total of 24 hours per month visiting 2,662 web pages.

No wonder the web can sometimes feel like crawling through treacle.

ComScore's study of the net surfing habits of users in 16 different countries also revealed that Google , Microsoft and Yahoo had the most valuable internet properties.