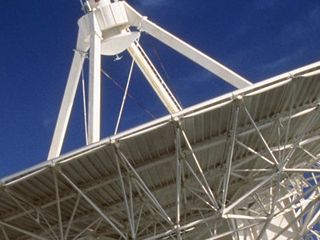 You won't need one of these to start orbital microblogging

We often hear how Twitter is rapidly becoming the first port of call for citizen news stories like the Hudson River plane crash, so it shouldn't be a great surprise to see the same techniques extended a little.

Still, pushing microblogging all the way into outer space on a satellite is quite a step.

The notion comes from Japan, where a non-profit called Kansai Space Initiative (KSI) has been set up to build a tiny satellite that anyone can use once it's in orbit.

The KaSpl-1 will weigh just 50kg when it goes up as an extra payload on a Japanese launch in 2013. The diminutive size has already seen the class dubbed 'microsatellites'.

Have it your way

KSI is encouraging anyone with an interest to pay ¥3,000 (£22) and join the team that will plan exactly what the satellite will do.

So far, it says there will be a camera pointing at a digital screen that can display emailed user messages while in orbit.

Having the entire Earth as the backdrop to the photo is sure to bring in users to grab the resulting personalised orbital shots as downloads.

After low-Earth orbit, how long can it be before we get Tweets and more from the Moon or further?