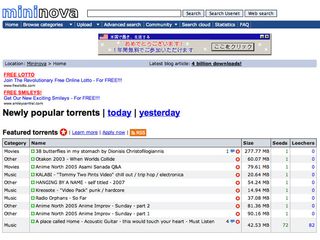 If the powers that be think they're making inroads in the war on terror - sorry, we mean "piracy" - they might want to lift their snouts from the trough and glance towards Mininova, which has just hit its 4 billionth torrent download.

The torrent tracking website - and let's remember, it's still unclear whether this is illegal or not - revealed the surprising statistic on its blog earlier this week, saying "It's nice to see that the download counter continues to speed up: after reaching 3 billion downloads back in November 2007, we expected to reach the current number only in March or April."

The folk behind the site also revealed the incredible traffic levels it is attracting. According to Google Analytics, which is not as generous in counting visitors as some web tools, Mininova drew 32 million unique users and over half a billion page views in January.

That number of readers/downloaders compares favourably with sites like Facebook, Wal-Mart and Apple, which currently have similar-sized audiences, but buckets more mainstream kudos.