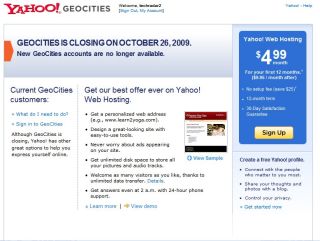 GeoCities has been given its final notice, with the website officially closing 26 October. Although the announcement of the date had been given back in June, it's only now that GeoCities users are receiving official closure emails.

The end for GeoCities, the free website hosting service, has been a long time coming, with the death-knell originally sounding back in April. At the time it was announced that no more registrations were being taken.

In its hey-day, the site was the breeding ground for web developers, giving people their first chance at making websites on their own.

David Bohnett and John Rezner created the site back in 1994, but then it was part of a high-profile takeover when Yahoo bought the site for $2 billion in 1999.

On the site's homepage, there is a Q&A page giving reasons for the closure. But instead of being a poignant farewell to the myriad users, it's merely an advert for Yahoo's other web-hosting service, aptly called Web Hosting.

The last user count of GeoCities was back in March of this year, where the site still had 11.5 million unique users.