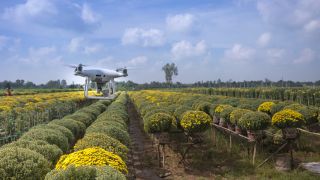 Tom Canning is VP of IoT at Canonical - the company behind Ubuntu.

It may not be the first industry that comes to mind when you think of AI, but artificial intelligence is showing great promise in solving some of agriculture’s most pressing challenges: from the need to increase productivity and profits, to overcoming personnel shortages and protecting the environment.

Of all the industries AI is impacting, it’s safe to say farming has the greatest human impact. According to the UN Food and Agriculture Organization, the global population is expected to rise from 7 to 9.2 billion by 2050, requiring a 60 per cent increase in food production. Consider that more than a third of current UK farmers are over the age of 50, and you have an industry stretched beyond its means and unfortunately ill-equipped for future demands.

Revenues from crop yields have remained flat for 25 years, while production costs keep going up. In short, farmers must find new and innovative ways to do more with less. And under the spectre of climate change - consuming less energy and water while producing less emissions and protecting the soil.

AI-driven technology - built on algorithms and models that analyse data to learn, adjust and improve over time, all without human intervention - are starting to have a dramatic effect on the farming industry. And an industry that has seen only incremental improvements over the last century, especially in the case of smaller sized farms.

For example, AI can help smaller farms be more profitable by scrutinising plant data to create a ‘profit map’ that advises farmers the most efficient ways to use a field to maximise yields. Each step - from knowing when to plant and harvest, to ongoing crop care and maintenance  - can now be automated.

The precision enabled by AI is an enormous boost to sustainable and ecological farming. Farmers can know exactly what is the best crop for each area of the field, and what areas unplanted so that fertility may be restored or planted smartly for pest control. Different crops can now be planted alongside each other in the same field, and harvested at different times providing maximum crop yield and field utilisation.

An ecosystem of startups is cropping up around the world to offer AI-powered tools to farms, including Small Robot Company (SRC), which believes robots can be more precise and environmentally friendly than traditional tractor-based farming; Bowery Farming, which uses robotics to cultivate crops indoors and has raised $90 million from investors; and CiBO Technologies, which leverages data analytics, statistical modeling and AI to simulate agricultural conditions under different variables.

SRC’s robots - Tom, Dick and Harry - are able to care for crops autonomously, taking care of every individual plant. They feed and spray only the plants that need it, providing the perfect levels nutrients and support, with no waste or environmental impact. The robots are a low-carbon alternative to large tractors. And by punch-planting rather than ploughing, the robots can radically reduce soil runoff and water pollution.

Tech and the environment in harmony

Most farmers want to protect the environment, and many have worked hard to reduce their impact to date. But traditional arable methods, in particular ploughing and blanket chemical spraying, have too often left little choice but to pollute the environment.

SRC’s robots use 90% less chemicals and 95% less energy than traditional methods used in the past. They are also part of a growing trend called farming-as-a-service (FaaS).

Humans have restricted working days. Our bodies determine it. But these small machines can work 24/7/365. That means they can help pick up the slack when labour is short and also take on more menial, time-consuming tasks, freeing up time for farmers to develop other areas of expertise for their farming business like branding and marketing.

In light of the mega-trends that farming faces - with ever more mouths to feed as the population grows, the need to safeguard farming as a viable business and the necessary sensitivity to the planet’s plight - agriculture is in need of a technological revolution. Thanks to a bumper crop of AI innovation, that revolution is under way.