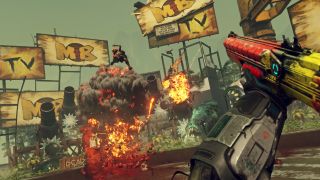 Playing Rage 2 without seeking out the Arks would be a deeply foolish decision. These bunkers contain the game’s most potent weapons and upgrades, affording you an arsenal of abilities that will enhance your experience and force you away from the reliable but boring Assault Rifle.

It’s a bit daft that it’s not so obvious how important they are early on (especially considering the length of the story,) but if you’re switched on and want to get the most out of your playtime, you’ll follow our guide as we show you where to head and what to grab so you can start smashing up wastelanders with supercharged wombo combos.

You can find this ark in the middle of the Twisting Canyons region. Head to the marker and fight your way to the metal structure at the back, which may or may not involve dealing with hordes of bandits. It’s fairly simple and intended to introduce you to the mission type.

Make a habit of grabbing all the pink lid storage containers and the Ark Chests with this mission and keep it up throughout the rest of the Arks to ensure you get all the resources possible from your violent visit.

You’ll be rewarded with the Shatter ability for your trouble, a kinetic blast that projects enemies away from the player.

This Ark is easy to miss at the start of the game, as Bethesda wants you to push into the middle of the map where the story missions are instead of snooping around behind you. Still in Twisting Canyons, head to the lower right portion of the map to find this strange Ark.

There are no enemies, so platform through, collecting the data pads on the way until you reach the ark, where you can learn the Vortex ability, a mini-black-hole that has a dual purpose as a delayed rocket jump.

A crater in the middle of nowhere, the Canyon Cove Ark is still a force to be reckoned with. Expect plenty of enemies to clear before you can access this lucrative puppy, which is nestled in the lower right of the Broken Tract area.

Stick your hand in the machine to retrieve the Defibrillation ability, which has you completing a Dance Dance Revolution-esque mini-game to wake you up inside, as Evanescence would say.

Still in Broken Tract, this Ark should be on your map from the start and consists of a layered compound with a giant metal door you need to go around to the right. Wipe out the pistol-packing punk rockers and advance to the back of the section to unlock the door.

You’ll get the Grav-Jump, essentially a double jump that adds meaningful mobility to the game. Combine it with your dash and it really sticks out as one of the most important abilities to grab in the game.

Head straight left from the Great Crack Ark and you’ll find another crater-based compound with a giant mech to deal with. Focus on his glowing forearms and use explosives to take it down, then clean up the rest of the troops nearby with your abilities gained so far. Vortex works a treat when enemies start to clump up.

Once you’ve cleaned up the place, head over to the Ark and unlock it with your focus to receive the Barrier ability, a throwable shield you can use to avert enemy fire. Playing Rage 2 is all about being up close and personal though so you might not get much mileage out of this one!

This Ark requires a little bit more work than usual. First, it’s down in the bottom right corner of the Dune Sea. Second, to unlock the door you have to reroute the power at some nearby substations. This involves lengthy jaunts into conflict-heavy reactor beds. Hit the button at the Ark location to be shown where they are on the map.

Once there, you have to use your focus to pull the bolts off of the machines and then shoot the three blue nodes to blow them up. Do this twice then head back to the Ark and make mincemeat of the Shroud enemies inside the unlocked door.

Once you open the Ark you’ll be able to access the Charged Pulse Cannon, which gains more power as you fire. Just be sure to cool it off every so often so it doesn’t overheat and you’ll be well on your way to mastering this dangerous weapon.

Nestled next to a pink skyscraper, this is the first Ark in the Sekreto Wetlands, and it’s guarded by another dangerous mech. Wipe out all of the grunts first and then take it on with your special weapons and abilities. Vortex is great for making the mech turn around so its weak spots are exposed.

Defeat the cabal and you’ll be able to focus on the Ark door and unlock the Rush ability, which uh… isn’t the most exciting thing in the world. It basically makes you run faster and can be used as an offensive weapon if you charge into enemies whilst using it. Worth it as a speed upgrade at the very least!

Up in the top left of the Sekreto Wetlands you’ll find this Ark amidst a set of swampy cabins and Shroud enemies. It’s easy to spot amongst the mayhem, just make sure you clear out the goons and you should be good to go.

Unlock the Ark once you’re done and you will receive the Firestorm Revolver, which fires out bullets that can be triggered to detonate when stuck to enemies, lighting them on fire. It’s one of the best weapons in the game, especially for dispersing with crowds.

The first Ark spot in the Torn Plains, Earthscar is easy to spot especially if you’re riding around in the Icarus drone (which we highly recommend you use when you’re hunting Arks). If so, land on top of it and rain hellfire from above, pushing out from the mouth of the Ark rather than in.

Then simply focus on it and you’ll unlock Slam, which is easily one of the most devastating abilities in the game. It’s a great AOE skill that you should really have from the get go. If you combine it with the double grav-jump and the dash to get serious air, it becomes even more powerful, so keep that in mind when you’re attacking from above.

This one is right next to the Earthscar Ark, just down and to the right. It’s hard to miss, especially with the giant green sign out front. Head inside and fight though the waves of enemies (or run through and only focus on the baddies at the end, we won’t judge!) and you’ll unlock an Ark which houses the Smart Rocket Launcher.

The genius behind this clever weapon is that it can be used to hone in on a certain enemy, letting loose a cluster salvo of rockets into their mush when you hold down LT. Perfect for flying enemies and difficult convoys.

Trees to your left, skyscrapers to your right - welcome to Needle Falls Ark. Nestled in the notoriously difficult to navigate region of ‘The Wilds’ we suggest you follow our map image and use the Icarus to make it there as quickly as possible.

Once there, drop ships will throw Authority troops at you which you’re going to have to wipe the floor with. Kick some butt and you can unlock the Grav-Dart Launcher, an absurd tether weapon that is well worth the conflict. It’s a machine gun, but the more shots you hit the greater the force, so you can really chuck your enemies at the walls and ceilings with some order of magnitude.

You’ve made it! The final Ark is waiting out in the north most part of The Wilds for you. Head up there for a serious challenge. We’re not fooling around here, there’s a Cyber Crusher waiting to stomp you into the mud and legions of mutant space soldiers.

Once you manage it though you’ll be able to unlock the Hyper-Cannon, which has bullet penetration and deals obscene damage. With that, you’ve completed every Ark and unlocked every gun and ability in Rage 2.