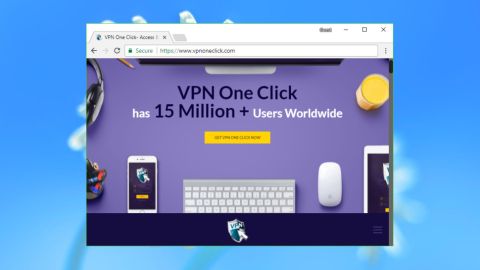 VPN One Click is speedy and cheap for single mobile devices, but there are too few features and too many problems to seriously recommend the service.

VPN One Click is a popular provider which delivers a basic VPN service for a budget price.

Experts may not be impressed by the technical specs. There's no support for the configurable and secure OpenVPN protocol, for instance – instead you're left with L2TP/IPSec, IKEv2 and the horribly insecure PPTP.

The website is a little disappointing with few low-level details on the service. Instead it seems more of a marketing exercise aimed at novice users, and it's not particularly successful even at that level.

This sounds great, until you realize that you're charged separately for each device. $1.25 a month for an Android device alone (on a yearly subscription) could be a real bargain, but add a single PC and that jumps to $3.33. For comparison, Private Internet Access charges only $3.25 to support up to five devices, and it doesn't care what they are or how you mix them up.

The VPN One Click website claims to offer a free version which restricts you to servers in Europe only, and is free for a "limited time" (the site neglects to mention how long that might be).

We tried the Windows and Android clients and weren't offered a limited free version on either, but there is a free trial. You must hand over your payment details first (app store or PayPal, there’s no direct card option), but you won't be charged if you cancel within the first seven days.

We're always interested to see what a VPN provider says about its logging policy, but this proved unusually difficult with VPN One Click, as the company hardly says anything at all.

The front page of the website claims the company "keeps no connection logs", and the same statement is repeated elsewhere, but with no further explanation or details, that doesn't really tell us anything useful.

The privacy policy is no better. It's ridiculously short, has barely any definitions, doesn't explicitly cover the core VPN service, and includes enough loopholes to make it meaningless anyway ("no user information is ever collected except when redeemed [sic] necessary").

The only tiny extra detail we could find is in VPN One Click's ‘How to choose the best VPN’ article, where the company says it doesn't "keep any user info." That would be "except where redeemed necessary", right?

What's frustrating here is that VPN One Click does have some interesting privacy-related points to make. You don't have to register with the company to sign up, for instance, or directly hand over your email address – you can simply pay from the client. Interesting, and just the type of detail that should be explained in the privacy policy, if VPN One Click is looking to win over more skeptical users.

Getting started with VPN One Click is as easy as downloading the client for your desktop or mobile device. There are no less than six clients on offer – Windows desktop, Windows Mobile, Mac, iOS, Android, Kindle Fire HD – and a quick check of the various app stores showed decent ratings of around 3.6 to 4 stars.

We grabbed the appropriate client for our Windows 10 system, and the installer set it up in a few seconds with no issues or complications at all.

The client has a good-looking interface, with a world map, lists of servers organized by continents and a clear status pane displaying details on current location, IP address and subscription status.

For all the client's visual style, it doesn't have much substance.

The map doesn't show the server locations, for example. It's not clickable, and can't be zoomed or scrolled.

The nested server list keeps every location at least two clicks away, so for instance you must click Americas > United States to see the American servers.

Each location is displayed as an IP address rather than as a city. European users might prefer to connect to New York rather than going cross-country to California, for instance, but all they'll see are options like 165.227.9.19 and 107.170.216.7. Some of the clients are a little better – the Android offering labels servers as United States West or United States East – but that's still less detail than you'll get with most providers.

The client doesn't give you any ping times or server load data on individual locations, and there's no favorites system to help you save locations for speedy access later.

We tapped the Buy button and a browser window opened at an anonymous-looking apis.bizx.com site, before quickly redirecting to PayPal and asking us to pay our subscription to Bravotelco Limited.

We suspect customers would much prefer to be taken to a shopping cart on the official VPN One Click site, just as reassurance that their money is going to the right place. Many would like the opportunity to pay by card. And despite the website claiming that you can pay via Bitcoin, that's not an option provided by the client.

After handing over our payment a website message explained that the new account would be activated within five minutes, but in reality it only took a few seconds. We returned to the client, clicked 'Refresh Account Info' on the menu and our subscription instantly updated from 'Expired' to 'VIP'.

Subscription paid, we were now able to connect to any location by clicking it in the list. Unfortunately, the client didn't give us any audio or desktop notification to warn when it connected or disconnected. That's a problem, as it could lead to a situation where you think the VPN is active and protecting you, when in reality the connection has dropped. (The service uses IKEv2 which should automatically reconnect you anyway, but we would still expect the client to keep users informed.)

It got worse when we closed the client window and found it didn't minimize to the system tray, but instead shut down the application while leaving any active connection open. This means you can still be connected to the VPN with having any visual indication of that, and it also suggests the client is making zero effort to monitor or manage the connection (most clients will close active connections if you shut them down).

We relaunched the client and found it didn't even recognize we were still connected. This is a big, big problem, as it shows you can't trust the client to accurately tell you when you're protected by the VPN, and when you're not.

With the app unable to deliver even the most basic features, you won't be surprised to hear that there's nothing more advanced. No protocol or port options, no kill switch, no DNS controls, no 'launch with Windows' option or ability to reconnect to the last-used server. The client doesn't even have a Settings box.

Our regular privacy tests revealed further issues, with both doileak.com and dnsleaktest.com reporting that our connections had DNS leaks.

Doileak.com was also able to spot that we were using a VPN-like connection involving multiple hops. That's not a direct privacy leak, but could mean that geo-blocked websites will continue not to trust you. Perhaps as a result, we found that BBC iPlayer blocked us when we tried to access it from a UK server.

For all our problems with the Windows client, we've no complaints about performance. Our tests* showed we could achieve up to 70Mbps download speeds on a 75Mbps fibre connection via our nearest UK server. Near European countries reached 60-70Mbps, UK-US connections ranged from 28-40Mbps, and Asian servers were variable but with some highlights (5Mbps to Hong Kong, 10Mbps to Japan, over 30Mbps to India).

These figures aren't directly comparable with our regular tests and most other VPNs as they're using a different protocol (IPSec and IKEv2 as opposed to OpenVPN), but overall they're still very good results. VPN One Click is disappointing in many areas, but speed isn't one of them.

VPN One Click is fast, and could be a cheap way for undemanding novice users to protect a single mobile device. But if you're looking for features, or privacy, or power, or you need to protect desktops or multiple devices, you'll be much better off somewhere else.