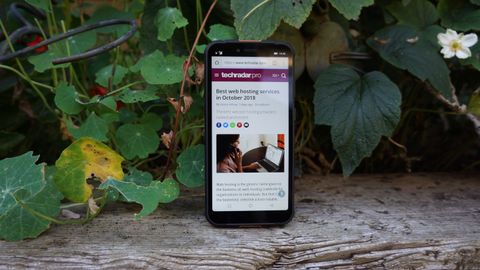 The iPhone-style notch display is one way of minimising the bulk of this trim and tough handset. It feels robust, looks good and makes room for a large battery that fast charges via a USB-C port.

Ulefone’s ruggedized Armor series is popular in its native China and with affordable smartphones like this in the lineup, its distribution is reaching around the rest of the world too.

Online Chinese retailer, Gearbest, sent us the sample and sells the Ulefone Armor 5 for $179.99 at the time of writing. Note that, while this price includes delivery, it is exclusive of any taxes that may be levied by HMRC or the courier companies on behalf of the vendor. Want to buy tech from online Chinese retailers? Read this first.

We were impressed by the Armor 2 for its blend of tough build quality and speedy performance, but things have already moved on and the Armor 5 looks even better. The new phone offers a larger screen in a smaller case thanks to the use of an iPhone-style notch display, where the front camera and speaker are located within the display area.

It makes for a sleek pocketable handset that manages to make room for key features such as a fingerprint reader, dual lens camera, USB-C port, a dual SIM tray that can also hold a microSD card and a fairly large 5Ah battery.

Somehow, it’s all squeezed into a slim sandwich design that looks more like a fashion phone than an IP68-rated tough phone. And last but not least, the affordable price is also a strong plus point.

From the front, the Ulefone Armor 5 looks like an iPhone inside a close-fitting case, especially with that notch housing the camera and speaker at the top of the screen. But the metal bezel holding the Gorilla glass front and acrylic plastic back in place is actually the frame of the phone itself and you can see the six tiny engineering screws that hold it together. That’s a sure sign of a rugged phone, as are the rubber bumpers at the four corners and rubber seals covering the three openings.

The protective bezel hardly protrudes further than the screen, which is the same Corning Gorilla 4 glass found in every other half decent smartphone, so wondered how drop proof this handset really is. Figures aren’t given by Armor and we were reluctant to test our only sample to destruction. Suffice to say, it survived some steep falls on its bezel and it certainly feels very well made.

The headphone, USB and SIM card ports are all tightly sealed against water and dust ingression, which wins the Armor 5 an IP68 certificate and the only two buttons on the phone, a volume rocker and power button, are both made of metal. A flash of colour in the detailing around the ports and the edge of the phone makes it stand out easier to find in the dark. It looks pretty good too.

The acrylic back cover is available in either black, as pictured here, or a shimmering blue and it is even more resistant to knocks and scratches than the Gorilla glass front.

Here are the full specs of the Ulefone Armor 5:

In terms of specifications, this isn’t the most sophisticated rugged phone out there, but that’s reflected in the price and the balance feels about right for a device that runs a higher risk than most, of getting trashed.

The screen feels large enough at 5.85-inches, even with a notch taken out of it, and the aspect ratio of 18.9:9 lends itself very well to split screen viewing, or scrolling down long lists. The resolution is only 1,512 x 720 pixels which is actually lower than that of the old Armor 2 and not Full HD, which is odd because it claims to record video at 1080p quality.

Inside, the Helio P23 chip with 4GB of RAM seems adequate at running Android 8.1 Oreo without a hitch. There’s 64GB of memory, which could be expanded by adding a 256GB microSD card. However, the memory card shares a space in the dual SIM card tray, so if you add memory, you can only fit one SIM. It is a slight compromise to keep the size of this handset down.

There are two cameras of reasonable resolution and the rear 13MP camera has a dual lens that helps it achieve some decent depth of field shots. As you would hope from a phone that is designed to work outdoors, the battery is larger than average and rated at 5Ah, which should give you up to 18 hours of talk time. This isn’t the longest battery life for phone in this category, but the good news is that you can recharge it in three hours, thanks to a USB-C port that allows fast charging, or you can power up wirelessly, which means you don’t have to fiddle with the rubber port seal.

Other useful features include face and fingerprint recognition and NFC for paying with Google Pay. It’s only a pity there’s no hardware function button. These are always useful on a rugged phone when you might well be wearing gloves, or too busy to use the touchscreen interface.