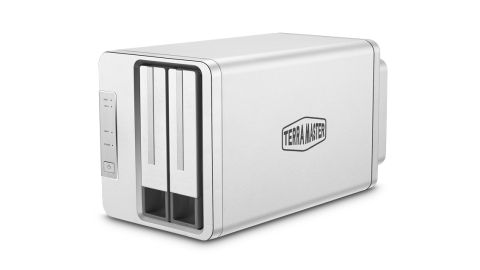 The F2-220 is a robustly constructed and powerful NAS offering that can fully saturate the available bandwidth of Gigabit Ethernet, but it lacks the software maturity of rival devices.

TerraMaster is a brand of Noontec, a company that primarily sells headphones. However, in the electronics game diversification is key, and with TerraMaster the company has plunged into the personal and small business NAS market with both feet.

The F2-220 is one of twelve NAS products the firm makes ranging from single drive devices to the four-drive units meant for small business users.

The dual-drive NAS boxes like this one are either for people who need more capacity than a single disk can hold, or are sufficiently paranoid about data loss to realize the value of resilient multi-drive solutions.

Being a remarkably competitive market, can TerraMaster crash this party with the F2-220, a NAS box which retails at around £180 at Amazon (or $190 in the US)?

TerraMaster went with the front loading option on the F2-220, meaning that the anterior view is dominated by the drive bays, neither of which can be locked.

With the exception of a power button and a few subtle LED indicator lights, this is a very clean design. Had TerraMaster resisted the urge to slap an ‘Intel Inside’ sticker on it, this unit might have been even better looking.

The maker also stuck a huge yellow sticker on the top warning of how not to lock drives in place. This is necessary because you can get drives to appear connected when they’re not fully engaged, with predictably dire consequences.

What these bays needed was the ability to lock, but TerraMaster decided not to include that capability. These bays are also allegedly hot-swappable, but few people we know are brazen enough to try and replace a drive while a NAS box is operational.

That point aside, the F2-220 is well made, and the formed aluminum tube that makes up the majority of the structure is dependably substantial.

On the back is a vent for a single 80mm fan, one Gigabit LAN port, along with two USB ports (of which one only is USB 3.0) and the power connector.

Internally, the drive trays are built to take either 3.5-inch or 2.5-inch SATA mechanisms, and during testing, we installed two Seagate 4TB IronWolf NAS drives. Tool-free trays aren’t part of this design. Instead, the F2-220 comes with a good number of fiddly screws to attach the drives to the trays.

If this appears all very by-the-numbers so far, your patience will now be rewarded, as the computing hardware inside the F2-220 is decidedly different from the average offering.

When it came to our first glance down the spec sheet, we assumed that the details of the hardware had somehow got swapped with that of a cheap desktop PC.

Typically these devices use ARM SoC technology, as it’s cheap and sufficiently powerful to control two hard drives, and handle a Linux-based operating system with aplomb.

TerraMaster instead went with the Intel Celeron J1800, a chip specifically built for the low-end desktop PC market, sporting dual-cores and a 2.41GHz clock speed, overclocked to 2.58GHz.

The status of this Bay Trail part is ‘end of life’, as it was first made available by Intel in Q4 of 2013. The chip is surface-mounted using FCBGA1170 and even includes an Intel HD Graphics GPU that will never get any use in a box with no video outputs.

Maybe Intel is selling this chip and its support technology off cheaply to clear excess stock. Whatever the reason, this NAS box ended up with a PC processor, so there is more power in the F2-220 than it can plausibly need or use.

The manufacturer also blessed it with 2GB of RAM, and a small amount of flash memory to hold the TerraMaster TOS operating system, leaving the installed drives purely for data.

A quick peek inside revealed that while the default memory is surface-mounted, there is an extra unoccupied memory slot on the underside of the motherboard that could be used to upgrade the F2-220 modestly.

Next Page Performance, usage and verdict