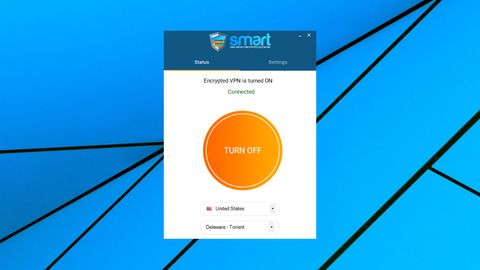 Seriously cheap, and it really can unblock Netflix and other sites, but technical flaws (including a very poor kill switch) mean we can't recommend it for anything more.

Smart DNS Proxy is a privacy brand of Global Stealth Inc, the company also behind the website unblocking services Getflix and uFlix.

The Smart DNS Proxy network isn't as big as it used to be, but there are still multiple locations spread over 38 countries, including a few that we've rarely seen elsewhere (Mozambique, Nepal.)

Prices are surprisingly low. A one-off month is $4.90, subscribing for a year cuts this to an equivalent $3.33, and the two-year subscription is effectively $2.08 a month, less than half the price of many competitors.

We were even more impressed to see a 14-day free trial, but that wasn't quite what it seemed. It's not made clear on the site, but the trial is for the Smart DNS feature only – the VPN can only be activated if you purchase a subscription.

Smart DNS Proxy does a poor job of highlighting its privacy and logging policies. There's very little information available, and even that is difficult to track down.

The website doesn't mention the topic on its front page, for instance, not as much as a quick 'zero logging!' message.

Heading off to the Privacy Policy didn't help. The document focuses on use of the website rather than the VPN, and even at that level, its explanations were frustratingly vague.

Using Google to search the Smart DNS Proxy website for 'logging' finally pointed us to the best page, with the company's explanation of 'what it means to be a logless VPN.'

But despite claiming to be a 'logless VPN', the page goes on to list some significant items that it does log: 'Dates (not times) when connected to the VPN service, choice of VPN server location, total amount of data transferred per day.' There seems to be some session logging here, though probably not enough to link an internet action to your account.

While it seems that Smart DNS Proxy isn't carrying out significant logging, its lack of clarify and transparency is a concern. Most small VPNs will never have the time or resources to put themselves through a public privacy audit, but they should at least spell out what they're doing, in a clear and accessible way.

The Smart DNS Proxy Windows client has a simple and stripped-back interface which is trying to be easy to use, but doesn't quite work.

The main screen has a list of countries, for instance, but no 'fastest server' option to automatically make the best choice.

The client also enables choosing individual cities, but it displays these on a separate list, and they’re not visible until you've chosen a country. That's a problem, because not all countries have servers that support all Smart DNS Proxy features. If you're looking for a server which supports torrents, for instance, and there isn't one in your country, you're forced to manually choose neighboring countries and open their server lists until you find something. There's not even a Favorites system where you can highlight preferred servers for easy access later.

The situation isn't improved by inconsistent server names. Choose the UK, for instance, and you're given locations like 'London 1 - SmartVPN', 'London 1' and 'uk-lon1-sstp-serverlocation.co' all on the same list. How is the first option different to the others? Does the last one only support SSTP? Should the typical user even have to know what that means? Given that Smart DNS Proxy seems to be marketing itself to a not-so-technical audience, we would expect its apps to be easier to use.

Elsewhere, a Settings panel includes a small number of important options, including your choice of protocol (OpenVPN UDP or TCP, L2TP, PPTP, SSTP), the ability to launch along with Windows, and a kill switch to block internet access if the VPN drops.

We think it's important that users know when a VPN app is protecting them, and when it isn't. Smart DNS Proxy seems to disagree, though. The Windows client doesn't use notifications to tell users when it connects and disconnects, and when we forcibly closed L2TP and OpenVPN connections, the client didn't even realize. It continued to say we were connected, even though our real IP was now exposed.

This inability to detect a dropped connection meant the client's kill switch didn't work, either. That doesn't mean it's entirely useless - our method of closing OpenVPN connections (killing the OpenVPN.exe process) is far more drastic than you're likely to experience in real life - but it's not something you should trust.

The positivity continued as the client's website unblocking abilities got us into BBC iPlayer, US YouTube and US Netflix.

We completed the review with our speed tests, which found below average but usable results. UK speeds reached 30-40Mbps, around 40% down on the best VPNs, and US connections were worse at an average 20-40Mbps. Smart DNS Proxy's more remote locations produced the slowest speeds, but even they were just about usable for browsing, with both Nepal and Angola averaging 5-10Mbps.

Smart DNS Proxy is great at website unblocking, but its poor kill switch is a major technical downside, and the clumsy app interface makes it awkward to use. It's so cheap you might want to use it anyway, just to access Netflix or other sites, but we wouldn't recommend it for anything more.