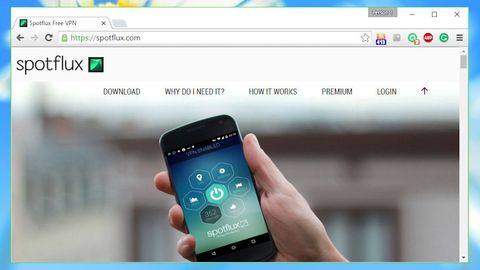 Spotflux is a solid service which is extremely easy to use and offers some neat extras like malware protection, but servers are thin on the ground, and performance can be variable.

Update: As of the end of August 2017, Spotflux has closed down. If you’re looking for an alternative, be sure to check out our comprehensive roundup of the best VPN services on the market (or the best free VPN providers, if you’re after a freebie offering).

Some VPNs try to win you over with big privacy claims. Others point to their super-low prices. Spotflux does both, but also piles on the extras, including ad blocking, phishing protection, tracker blocking, even mobile data compression to cut bandwidth requirements and save you time.

If there's a catch, it's that the core VPN product is a little basic. Spotflux only offers a few servers, and there's little in the way of advanced settings or configuration options.

Spotflux Premium enables use on up to five devices, including mobile, Windows or OS X, but it's still very reasonably priced at $37.99 (£29, AU$51) for a year.

Want to try before you buy? That makes sense, and Spotflux offers a generous 3 day trial of the full Premium service. You don't need to provide an email address to install or use the software, and if you do decide to upgrade, there's a Bitcoin payment option as well as PayPal and credit card.

Spotflux's Privacy Policy is a little better organised than most of its VPN rivals, and makes real efforts to tell you what you want to know: the data the company collects, how it's used, shared and so on.

The results aren't entirely reassuring. There might be packet inspection of user traffic to prevent malware or trackers. Spotflux could also "discriminate against devices, protocols, or applications", "throttle user connections" and "purposely timeout user connections" if "they are determined by Spotflux to be harmful to the Services or illegal".

To be fair, Spotflux is little more specific on logging – it will hand over information when directed by a court, but "since Spotflux keeps limited to no logs, the amount of information available to law enforcement is very limited".

One clause we noticed is Spotflux asks that children under the age of 16 shouldn't sign up for an account, and may only use the service "under the approval and supervision of [their] parents or legal guardians", presumably to comply with the US COPPA law.

Despite its many features, Spotflux's client is one of the simplest around. For the most part you just hit a button to toggle protection on or off, and there's a short list of alternative servers if the default doesn't work.

Poking around the settings doesn't reveal much more. You can set the app to load when Windows starts, choose TCP or UDP connections, set an alternative proxy, and that's about it.

Spotflux makes a big deal of its malware, tracker-blocking and anti-phishing technologies. They delivered only average performance in our tests, blocking some threats but missing plenty of others, but these features could still give you a little extra protection.

Our benchmark performance tests* showed above average speeds, with latency only increased by 19% – which is pretty good compared to rival services – and both download and upload speeds falling by a minimal 7% compared to our normal rates. But we also noticed a wide range of speeds during testing, and while performance was mostly very good, occasionally speeds dropped to an unusable crawl.

Spotflux stands out for its extras and highly user-friendly nature, and if these concerns are a priority, take the three-day trial for a spin. But if you're after speed, or configurability, or a wide choice of locations, there are better deals to be had with other VPN services.

*Our testing included evaluating general performance (browsing, streaming video). We also used speedtest.net to measure latency, upload and download speeds, and then tested immediately again with the VPN turned off, to check for any difference (over several rounds of testing). We then compared these results to other VPN services we've reviewed. Of course, do note that VPN performance is difficult to measure as there are so many variables.